Congress has failed to act to stop closures of post offices across the country in what has been seen as a push for union busting and privatization (see, for example, Postal Service Cuts a Path to Privatization, say Critics, Common Dreams, 2/24/2012). The impact on rural areas will be especially severe, and massive job loss is not what the economy needs at this point. Stopping Saturday delivery will also be a likely consequence should Congress continue to ignore the postal crisis.

There wouldn’t be a crisis were it not for Congress’ vendetta against this large, unionized workforce. A 2006 law required the postal agency to pay $5.5 billion annual into a health benefits fund for future retirees, a requirement unknown elsewhere. Plus, the agency has not been refunded $11 billion that it overpaid into a pension fund.

Congress should act to repair their damage, but until they do, Disappeared News would like to propose an interim solution, one which has precedent and could have multiple benefits.

For some reason, a newspaper article from 1883 has been bouncing around on twitter. One tweet came right behind a tweet about post office closing in New York City. I just put the two together.

The cost of air travel has soared, and everyone hates the airport delays and the TSA pat-downs. So why not try what worked in 1883? The text of this article from the Ouachita Telegraph is circulating on Twitter. I looked it up. It’s for real. And it suggests how we could kill two birds with one stone: 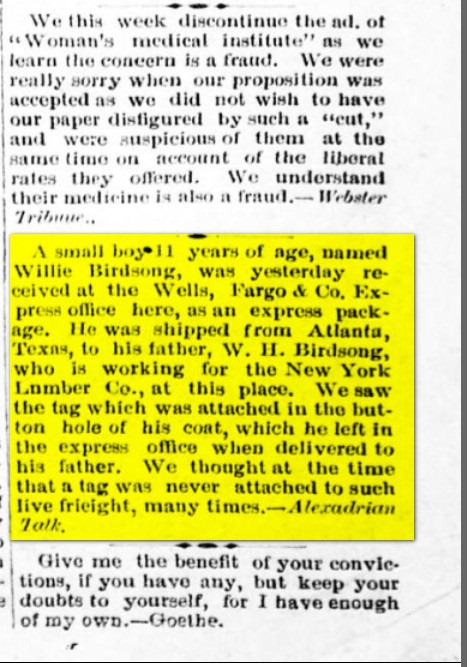 Look, it worked. Someone put a tag on this kid and paid the postage. He made it from Atlanta, Texas to Monroe, Louisiana as an express package.

I’ll bet the postal service could get the two of us from Honolulu to Volcano Village on the Big Island cheaper than taking a taxi to the airport, flying with an increasingly expensive ticket, and then renting a car at the other side. With any luck, they could deliver us right to our favorite B&B.

Will this save the postal service? If not, then it will take lots of people writing to their congresscritters and protesting, because post office closures and layoffs are the inevitable result of a complacent citizenry. Be silent and they will take away, take, close, fire, lay off, shut down. That’s the agenda of those who would profit from the economic turndown.