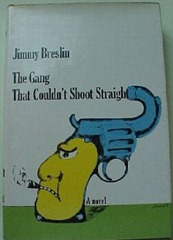 Review of The Gang That Couldn’t Shoot Straight (the movie): “In this comedy, based on Jimmy Breslin's novel, a bungling gang of hoods make increasingly ludicrous attempts on the life of a Mafia boss. Each attempt ends in failure.” –Sandra Brennan (Rotten Tomatoes)

The state and city departments of transportation continue to amaze me. I’m also amazed that they continue to hold their jobs. From this morning’s paper:

A $2 million floor at Hono­lulu Airport that was installed for November's Asia-Pacific Economic Cooperation forum is a shiny showpiece that might be just a bit too glossy.

By some accounts, passengers arriving at the airport often slip and fall on the more than 15,000 square feet of glossy, sand-colored terrazzo flooring featuring Hawaiian words and a 1,800-square-foot, 35-foot-diameter brass-and-nickel-colored compass.

Installing a floor in public areas is not rocket science. Dear DOT: it’s 2012 and all over the world, floors are being installed that do not cause people to slip and fall.

Why? Because, dear DOT…

1) They might be hurt. If you don’t care much about the average visitor or Hawaii resident, suppose an APEC delegate fell?

2) They might sue. [And then the state will settle and pick our wallets to pay the settlement.]

3) You’ll just have to fix it at taxpayer expense later.

4) It makes Hawaii look like the banana republic that maybe it really is.

"No one normally puts smooth, polished terrazzo where it's exposed to the elements, such as rain," [Micah] Watts[, president of Stone Masters Inc.] said. "We've always made it clear that this is an experimental process. The intent was to make it pretty and inviting to passengers. With it comes the negative effects that the floor will be slippier."

Slippier. How cute. Another word might be “dangerous.” That one at least passes spell-check.

So according to (3) above, the floor will be fixed at taxpayer expense. How? They are going to cover it with a sealer which incorporates granulated glass.

There is much more to criticize than this hazardous installation at the airport.

Somebody please fire these people.

Fire these people? Didn't we just put them in charge of the biggest transportation program ever to hit Hawaii?


My thoughts exactly, Larry.
Is it so difficult to pay attention to how a product will be used?????
It's not like multiple outdoor surfaces in Honolulu haven't already had the same problem.
I remember DECADES AGO that the tiles at the Federal Building and the USS Arizona Memorial were installed with the same problem, and also had to be redone. ("Looks pretty, but people fall when wet.")
This is just too frustrating an example of incompetence for words.
"Fire them" is right.
Is anybody listening?