This spam doesn’t originate in Nigeria. We taxpayers fund it, but it’s still designed to scam us, just like the overseas product.

An article in this morning’s Star-Advertiser (Council targets rail PR contracts, p. B1, 6/26/2012) includes a box with a list of some contracts and their dollar values. Unfortunately, the editors didn’t add up that column, forcing me to take out my abacus and do it myself. 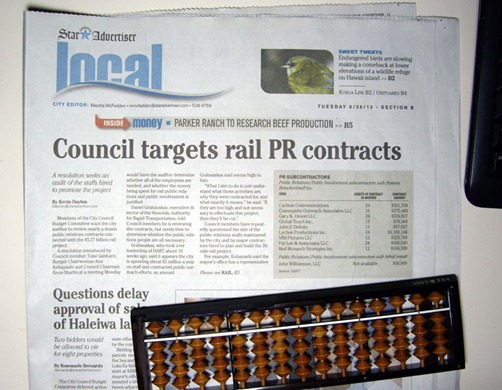 Much of that money goes to waste. On the continuation page (sorry, folks, it’s behind their paywall) the writer describes a controversy that arose around blog articles written by Doug Carlson, whose contract was listed in the Advertiser info box as worth $351,538. The issue was covered also in an article on the HawaiiNewsNow website, so let’s jump there:

"People's hard earned dollars being thrown by the million into this unknown pot," said Tulsi Gabbard, Honolulu City Councilmember, who introduced the resolution calling for an audit of the rail's public relations spending.

Doug Carlson is one sub-contractor who writes the Yes to Rail blog, which was blasted in the council meeting because Carlson is being paid with taxpayer money but criticizes political candidates namely anti-rail mayoral hopeful Ben Cayetano.

"Attempting to influence political activity, yet this person is being is being paid with taxpayer dollars and that is completely unethical, what to speak of some legal issues that would exist there as well," said Gabbard, during the meeting.

"I certainly reacted in the way that I think is appropriate which is that would be an inappropriate use of anybody's time if it's on our dime," said Grabauskas, in response to Carlson's blog.

An audit may be a good idea, but in any event, money spent on rail PR doesn’t come back. And in the case of blogs and email, it may be largely wasted.

For example, I don’t read Doug Carlson’s blog. I did check it out some time ago, but hey, he’s paid to write that, there’s little there that many of us don’t know, lots of repetition, and so forth.

There’s a strong tendency on the Web to read material that you are in line with. So, for example, I’m not likely to visit many (or any) of the right-wing blogs, but I will read DailyKos, because that’s my interest. So who is reading the blog? In other words, what purpose does it serve if it preaches only to the choir?

What measurements has the city demanded to determine if this money is being spent effectively?

Doug, whom I have supported on issues in the past that I felt were worthy, in this case is a major “spammer.” I put quotes, because yes, I can unsubscribe. I do delete them, when I get around to it. As a blogger myself, I might possibly, you never know, want to refer to them one day, so I do check out the subject lines sometimes.

I haven’t deleted the spam box in some time. Here’s what’s in it from Doug. In other words, this is a little of the spam that taxpayers’ $351,538 is buying: 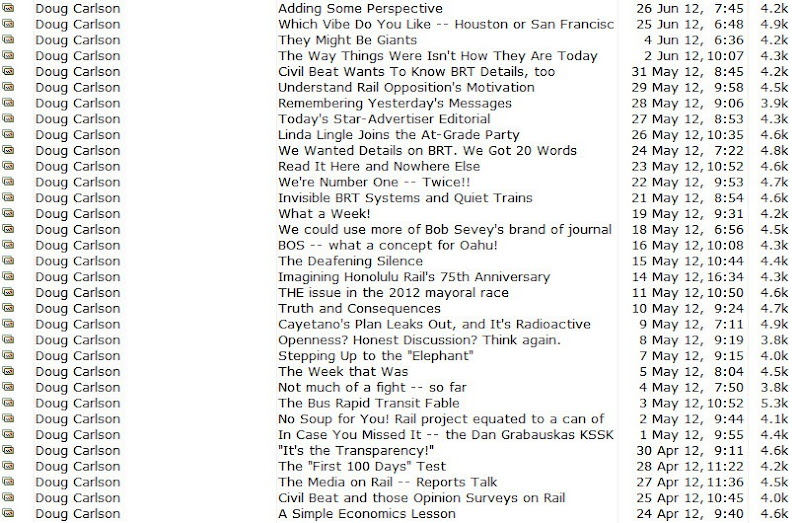 Email is still the killer app on the Internet. It has one weakness, though—you can’t tell if the messages are being read. So Doug sends them out, but how many are being read by those not already on his side anyway?

These messages are not the sort that will be collected into a best-selling book one day. Essentially, they are pure paid PR. Combined with the city’s efforts to exclude the public from the planning and decision-making process, they are offensive. In other words, they want to tell me, not hear from me. Instead of investing money in community-centered planning, the city chose to put it into propaganda (mind control).

So thanks to Tulsi Gabbard for introducing the resolution calling for an audit.

"People's hard earned dollars being thrown by the million into this unknown pot," said Tulsi Gabbard, Honolulu City Councilmember, who introduced the resolution calling for an audit of the rail's public relations spending.

The train isn’t even running yet, but it’s already delivering spam. I can think of healthier ways to spend this money, can’t you?

I just got around to reading this, Larry, 20 months after you wrote it, which also is 20 months since I moved to California after 39 years in Honolulu. The test of anything written in blogs or other sites on rail is whether it is factual, whether the material accurately describes projects and events and whether, in this case, the blog accurately portrayed the paucity of workable alternatives to rail by its opponents. You, Cayetano, Slater, Prevedouros, nobody ever identified factual errors at Yes2Rail. As for the emails that you show in today's post, the recipients either read them or they didn't. That's always the choice when unbidden messages arrive, isn't it? Call it spam if you want, but if you still have those emails (which I doubt), please go through them and identify any inaccuracies or useless information about rail vs the so-called alternatives. It won't happen. Besides, rail's being built. Job done.


Yes, job done.
job noun \ˈjäb\ (2) a : something done for private advantage
b : a criminal enterprise; specifically : robbery
c : a damaging or destructive bit of work