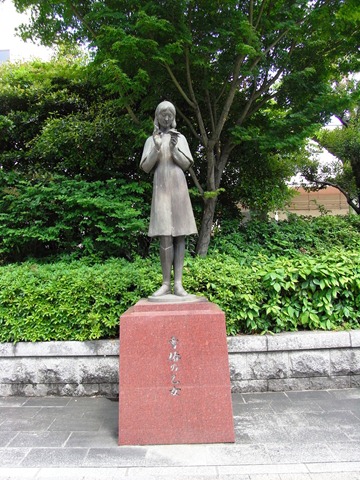 (photo taken by Taisyo)--Statue in memory of Sadako Sasaki in Naka-ku, Hiroshima, Japan

Kyodo News reports that one of the paper cranes folded by atomic bomb victim Sadako Sasaki before she died at the age of 12 will be sent to Hawaii in September.

Sadako had entered the hospital and was dying of leukemia caused by radiation exposure due to the bombing. Wikipedia relates that

On August 3, 1955, Sadako's best friend Chizuko Hamamoto came to the hospital to visit, and cut a golden piece of paper into a square to fold it into a paper crane, in reference to the ancient Japanese story that promises that anyone who folds a thousand origami cranes will be granted a wish by the Gods.

From the Kyodo story:

The origami, one of five kept by Masahiro Sasaki, 70, will be put on permanent exhibit at the visitor center of the memorial to the USS Arizona, which was sunk during the Japanese attack on Pearl Harbor.

The brother said he hopes the donation serves as the "first step" toward spiritually reconciling the victims of Pearl Harbor and hibakusha who survived the Hiroshima and Nagasaki A-bombings.

Hibakusha is the Japanese word meaning atomic bomb victim. It is used even for those who have survived.

There are various versions of Sadako’s story on the web. Here’s one from a website called myhero.com, and there is a book, Sadako and the Thousand Paper Cranes. Here is one more from the web.

President Truman lied to the American people and to the world by describing Hiroshima as a military target. 140,000 innocent civilians perished, and students of World War II know that even more died in the firebombing of Tokyo. Men, women and children like Sadako.

Strangely, the archetypal image of opposing armies clashing in an open field persists in the human psyche, even though today, as in the past, hostilities are commonly directed against civilians. The term “collateral damage” is still used even when civilians are the targets, as non-violent protesters are in the mid-East today, or when Israel slaughtered 1,400 mostly civilians in the waning days of the Bush presidency, or as Obama targets Afghan civilians with his fleet of drones.

When Sadako’s paper crane arrives in Hawaii, perhaps we can think also of those who continue to die in pointless wars.