Isn’t there something basically wrong with one man owning an island in Hawaii?

"Hopefully Mr. Ellison is a little more sensitive to the needs of Lanai and maintaining the lifestyle of the people," said Dennis Hokama, who was born and raised on the island. "But the bottom line will always be economic sustainability."

Ellison is "not a human bulldozer" and appreciates the beauty of nature, Wilson said.

Time will tell whether the new owner of a large chunk of the state of Hawaii is or is not a “human bulldozer” or is something else. 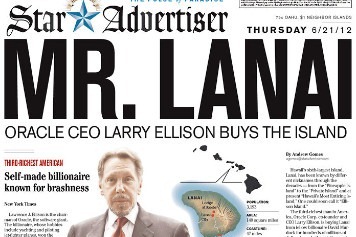 But I wonder how many people, surprised by the bold headline glaring from  newspaper boxes all around Oahu yesterday, are wondering how it can be, in this “post-colonial” age, that one man can actually own a major island in Hawaii?

Bow down to the new feudal lord of Lanai, a man who will have more power over the citizens of that island than will either the state or county governments. 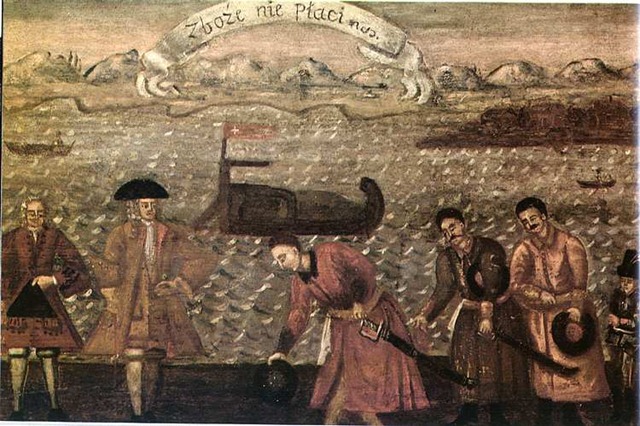 I don’t know and have never met Mr. Ellison. It’s not about him. It seems like an anachronism that one individual can hold such power over people and government just by putting his money down on the table.

Lanai is not the only private island in the state. The Robinson family owns Niihau. That historically significant name seldom appears in the news (and that’s perhaps the way they want it there).

Yes, newspaper reporters had to be allowed to visit the island, even though it, too, is part of the State of Hawaii.

Could Ellison lock down Lanai?

That’s not to say he would, only to raise the issue of whether or not there should be limits to land ownership in an island state.  Oops, we’re the only one. And oops, feudalism is alive and well here.

Exactly my thoughts - how can we allow 1 person (or one corporation) to own an entire island in the State of Hawaii? Feudalism is the answer.


"until we can find something to make the island valuable again," said Senator J. Kalani English. What a sickening and sad statement to make. As if nothing is of value until it has been corrupted by corporate interests and assimilated into the dominate colonizing value system.

Lanai can only be locked down if we allow it.


"Lanai can only be locked down [or privately owned] if we allow it." I agree and added a little more.

I wrote a letter to Mayor Arakawa foolishly thinking that we had several more days before this stinky ʻdealʻ went down but as I hit the send button an email saying the island had been sold came across my desktop.

This deal should be rescinded. What did Abercrombie get out of this, Mayor Arakawa or others?

The legislature and the public should have been informed and allowed public input. It is outrageous and stinks.

Here is my letter and please note that up until the sale we were led to believe it was Murdock, not Ellison:

The State of Hawaii is not for sale

It is disturbing to read about cavalier discussions of the sale of one of the Hawaiian islands based on invalid components such as the highest bid and personality. There was no mention of Hawaiiʻs laws.

I see your name is regularly linked to the potential sale of Lanaʻi and am not sure exactly what role you play in negotiating or accomplishing the deal. You stated you are “..confident that Murdock's love for the island will mean ensuring the new owner is a good steward.”

Articles also state that ʻofficialsʻ are discussing the sale. Iʻm perplexed as to who these officials are other than yourself because Castle & Cook certainly are not ʻofficialsʻ.

The dilemmas here are the blatant disregard for the very real and unresolved sovereignty issues, Public Law 103-150 and the obligation you and other state and county (as a political subdivision of the state under the HRS) officials have to uphold the protection and preservation of these lands.

You state in one article from the AP that you are sworn to secrecy on who the buyer is but arenʻt you swearing allegiance to an entity other than the oath you took to uphold the Hawaii State Constitution and its statutes?

Approximately 17,000 acres of Lanaʻi are Crown Lands. 90,000 acres constitute ahupuaʻa which are almost the entire island. Regardless of Castle & Cookʻs claim to have ownership of so many acres, the island, which is an island in the Hawaiian archipelago makes it an integral, inseparable part of the state of Hawaii which I know is not for sale.

It is prudent, if you are deeply entangled in this attempt to sell a section of the state of Hawaii, to gather real officials, attorneys and experts for a legal opinion. In the meantime, please declare a moratorium to this potentially perilous move.

Why was there no consult with the viable qualified sovereignty advocates? They are informed and intelligent sources of International and Domestic laws and relations. Not to make an effort to do so would demonstrate a harsh indifference in contrast to your past favorable liaison working with sovereignty efforts on Maui.

At any rate, please consider this as objection to the proposed sale of the island of Lanaʻi.


By the way, thank you, Larry, for blinking on this as it was pretty silent out there regarding the sale and any objections.


Actually, Lanai was locked down a few years back when Ellison's pal, fellow oligarch Bill Gates, got married there. I seem to recall some reporters got arrested.

Don't believe in property rights? So, anyone can wander all over someone's property even though there are "no trespassing" signs posted?

The law allowed Ellison Island (I like that better than "Lanai") to exist. The law would have to support the removal of all people from that island (when land leases expire, I assume) if he so desired.

You (in the plural) "allowing it" means nothing.


We (in the plural) do have elected representatives (stop laughing) who make laws.

But I believe even leaseholders have some rights, though this is way out of my scope of knowledge.

Thank you for "Ellison Island." I like that better also.


This is why there should have been public input and legal opinion.
Unfortunately, once again, elected officials have demonstrated their intelligence levels to be street level.
They donʻt belong in office.

Didnʻt anyone EVER tell them "feelings" have no place in something like this? The courts will tell you. Kalani English would have been wise not to open his mouth. For crying out loud, a 6 year old would have better commentary.


As opposed to the Statue of Liberty by Ellis Island, the immigration gateway of earlier centuries...."Give me your tired, your poor, Your huddled masses yearning to breathe free, The wretched refuse of your teeming shore...."

"Give me your wealthy, your lore, Your upper classes yearning to collect fees, The wretched excess of your gleaming hoard..."

"Give me your tired, your poor, Your huddled masses yearning to breathe free, The wretched refuse of your teeming shore.


That's good... now what would the statue look like?


That's carved on the Statue of Larry at the airport.

or choose another from reviewing google images for larry ellison


Yikes. That's one scary image, the way the artist has drawn him.

Parody cartoons using the Statute of Liberty often say something funny on the book she is carrying, or the torch is changed for some other object.

Unfortunately, I've come up empty on what would work in this case to properly honor "Ellison Island", already a parody of Ellis Island, and the inscription suggested above, "Give me your wealthy, your lore, Your upper classes yearning to collect fees, The wretched excess of your gleaming hoard...". I love the combination, but my brain has not come up with a statue image.

Any ideas? Or cartoons?


The image could be a really huge brass plaque at Ellison Airport those immortal words engraved below.

I've already put those words on the lower part of that picture and made is my desktop wallpaper.


Statue of Liberty picture with Ellison's head photoshopped in and him holding up a dollar sign?

Replace the book with a laptop or tablet computer with "Oracle" on the screen.