Is Laura Thielen a Democrat? Is Ed Case? Calvin Say? 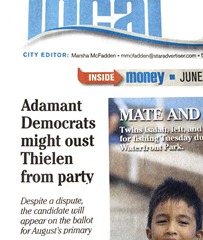 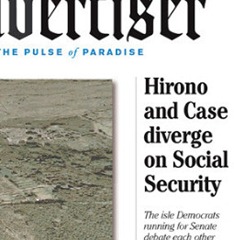 In the 49 other states, it’s probably easy to guess the party affiliation of a candidate or incumbent from their voting record. Sure, there are the so-called “blue-dog” Democrats and some moderate Republicans, but with some scrutiny, one could figure out who goes where.

In Hawaii, just guess that a politician is a Democrat and you’ll be right most of the time, simply because so many are nominally Democrats. At least, it says “Democrat” on the ballot at election time. Although Hawaii Republicans define themselves more closely to their national brethren, there are anomalies such as Rep. Cynthia Thielen, who outdoes any Hawaii Democrat in her concern for and defense of the environment and sound energy policies, and has been a champion of social services for seniors and others..

As we know, on many issues, there is little, if any, difference between the two national parties. Both are firmly beholden to corporate interests including Wall Street, Big Oil, Big Guns, Pharma, etc., and to the Israel lobby.

Hawaii’s party structure has developed differently. Because so many state politicians are gathered under the Democratic tent, describing everyone under the tent as a “Democrat” in the national usage of the term doesn’t work here, as we see from the two stories in this morning’s paper.

The Dems-who-meet-occasionally (the “party”) are the ones flailing around now with the issue of whether Laura Thielen is a Democrat. They have a certain power only within their own meeting rooms. As Thielen has shown, she can get on the ballot anyway, the Dems were impotent to stop her. According to the article in today’s paper, they currently are considering throwing her out of the party. That would look funny should she get elected despite their best efforts. Should she win office, she would be a player in the politics of the Legislature. Others have fit in—for example. Sen. Gabbard switched parties  and chairs the energy committee. In other words, once elected, one need not pay much attention to the Dems-who-meet-occasionally.

Thielen looks to me like a Republican. She served in Lingle’s cabinet as head of DLNR. When on the Bored of Ed, she livened proceedings considerably with her often out-of-order motions regarding breaking up the board, for example, which was the strategy Lingle was pushing.

But look at Case. So he favors “fixing” Social Security by raising the retirement age? That’s a line out of the Republican playbook and would hurt construction workers, for example. Social Security doesn’t need the “fixes” proposed by Republicans and Case, only an adjustment, somewhere down the road, similar to those made in the past. Raising the income threshold a bit, for example, would do it, and there’s no hurry. Case styles himself as a moderate, which is to say, to the right of many or most Hawaii Democrats.

So shouldn’t the Dems-who-meet-occasionally kick Case out of the party?

It doesn’t matter, because the real axis of power remains between the Speaker of the House and the Governor. What the Speaker wants, the Speaker gets.

In the Legislature, power is held first by the Speaker, who calls the shots through committee chair appointments and in other ways. Look upon the Speaker for a moment as the Shogun. The appointed committee chairs are then the feudal lords, who wield the considerable power allowed them only so long as they obey the shogun. Those whom we view as our elected representatives often have little, if any, power in this feudal system.

The committee chairs can direct votes on any measure. Chairs can defer (“kill”) a bill by edict, or can pass amendments that the committee members haven’t even seen, often written by the corporations or interests most affected by the pending legislation. And remember, House committee chairs are puppets. They serve at the whim of the Speaker. It’s similar in the Senate, where the President is a lesser shogun.

It is the Speaker who absolves conflicts of interest with a few words of approval. It is the Speaker who appoints the conference committee members and writes their scripts. Repeat for the Senate President, though his control there may be less intense. In truth, it’s hard to say, because the politics of the Hawaii legislature, in common with sister bodies elsewhere, is largely exercised behind closed doors.

There’s only one designated Republican left standing in the Senate, and they are a small minority in the House. The Democrat’s tent is wide and welcoming, and those within it hold views both liberal and conservative. The Dems-who-meet-occasionally seem somewhat irrelevant. If Thielen is elected, she will negotiate her position with legislative leaders, not with party leaders. If Case gets elected, he’s a power unto himself, heck with party leaders anyway.

Should the Dems-who-meet-occasionally kick Thielen out of the party? Whatever. Hawaii has more pressing problems than that one.

After watching her actions in the Environment Committee at the Convention Thielen is an upper-case Democrat. On the other hand, based on what he said during the convention and then after watching/hearing him debate this week, Case is the classic DINO. Say and his buddies resemble nothing more than the Southern Democrats who fled the party starting in the 1960's and now make up the right-wing base of the RepublicaNOs.

Ouch! Well-played. That hurts, but it touches my heart in a special way during this trying time.

I do not WANT the Party to be a merely "ceremonial" organization with incantations and rituals signifying nothing but the pretense of profound importance. But that is the route too many appear headed, supported with comfortable illusions of our significance.

We have a paper membership of about 60,000 members. That database has value as a resource for fundraising, communicating with and mobilizing. If only we were as guided by the Alinsky organizing orientation being attributed to us by paranoid rightwingers like Glenn Beck (or Andrew Walden locally). We have certain institutional advantages, along with institutional encumbrances, encrustations which we need to shake ourselves free from.

But indulging in politically correct fantasies about imposing progressive ideas upon "our" candidates, "our" elected officials and "our" membership base FROM ABOVE, rather than by organizing FROM BELOW, is worse than pointless. The Party, qua Party, is largely useless and the present factionalism and distractions ensure it will remain that way, only more despised and ridiculed than previously.

What a shame. What a waste. So much potential and so much meaningful work needing to be done.

I think you have hit on it--change from below. But when? What (who?) will it take?

As I typed the "What" I realized that often enough, it is one or more people who undertake to make a difference, and who seem to strike a responsive chord.


I don't believe Thielen's political beliefs were the issue. It was a rules issue. The problem is Thielen likely missed the deadline to join the Democratic Party because she was trying to figure out which party gave her the best chance of win the election.


I know her personally and I see Laura Thielen as a true "Big D" Democrat. Perhaps more independent than most, but her concerns are definitely Democrat in nature. Breaking up the 1 large school board was a reform many of us Progressives sought, even tho it's true Linda Lingle also agreed. I hope Laura Thielen DOES win the election! But her effort to run as a "D" has certainly shown the (non)democratic nature of the Hawaii Democratic Party. (a former Democrat, now Green Party member)