Carlisle and Caldwell on wrong track with transit

Mayor Peter Carlisle and Former city Managing Director Kirk Caldwell are both unclear on the concept of mass transit for Honolulu. From a Star-Advertiser story today:

Caldwell said he agreed with Carlisle that Cayetano's suggestion of using King and Beretania is unwise. "Can you imagine what the businesses are going to say along there as they lose parking and as they lose access to their stores?

Both Caldwell and Carlisle fail to note that a comprehensive transit system will bring people to stores and businesses—far more people would be able to visit than can park at limited meters along King and Beretania streets.

Unfortunately, the two politicians’ idea of transit is a single-line train that will not be expandable and is routed away from these two streets. Businesses on King and Beretania should be clamoring for more transit patrons. 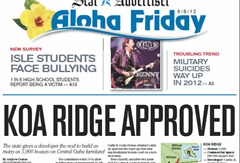 In fact, the same paper’s screaming headline should raise concerns for any small business depending on automobile street parking—should Koa Ridge be built, there will be thousands more cars added to the already gridlocked highways. If commuters have to spend more time on the road, they will be less inclined to make the trip to town.

Contrast the politicians’ transit plan with what can be achieved when the public has a say in how it lives and works.

Portland chose to use mixed transit modalities, including trams. They plan to expand the system, spending millions, not billions, of dollars.

Is Cayetano right, then? Who knows? The people have not spoken, only the politicians. And I can’t see any of them giving up their cars to ride transit to work.

Cliff Slater and Panos Preveduros complained that Harris's in-town BRT will be a "Traffic Nightmare". By increasing congestion on both King and Beretania Streets, people who live in Honolulu and East Honolulu will be stuck in traffic gridlock with the people from the WestSide sitting in buses. In-Town BRT just spreads the pain of traffic congestion to everyone. It appears the strategy of the Cayetano camp will be to spring Cliff's HOT lane idea on the voters after the election if Ben wins. HOT lanes will be a structure two to four time larger than rail stretching from West Oahu to Iwilei Street. This in itself sounds like a "Traffic Nightmare" in its own right, but will preserve Cliff's beliefs that everyone should be driving.


They will be driving unless Honolulu can get down to planning how it lives, works and commutes.

Slater will probably propose a privatized system since that what his Reason Foundation supports. That is, selling the private asset of a right-of-way to private entities to build and operate (collecting tolls).

If people do not demand a say in how they live on Oahu, they will be taken advantage of in one way or the other.