Today in history: Last broadcast on ABC of “The Adventures of Superman” (1958)

I learned to read by hiding Superman comics under my blanket, secretly reading late at night with a flashlight. For some reason I thought I could get away with it, and actually, I did. I don’t recall ever being caught. Which is strange, a kid reading comic books under the covers is so obvious. So I was imprinted with the whole Superman gestalt from thousands of images of this incredibly strong guy in the blue suit, red tights and billowing cape.

Then came TV. We had a black-and-white Dumont TV set. And it came with Superman inside! I was right at home. Superman was George Reeves on TV. He’s the ordinary, not-very-super guy in the picture on the left. 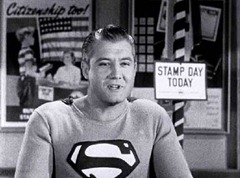 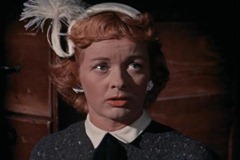 The outfit didn’t look right on him. Well, it might have, if underneath he was made like the Superman in the comic books who was not George Reeves. It didn’t matter. At least, though, his mom could have ironed his suit between takes. And his cape never behaved properly. Of course, without his cape, he would have looked just like our neighbors next door. I don’t think they even owned an iron, either.

The other photo is of actress Noel Neill who played Lois Lane. The program was broadcast in color starting in 1954 according to Wikipedia, which knows these kinds of things. I don’t remember if I ever saw it in color, those sets were probably too expensive for us at the time.

To this day, if I conjure up an image of Lois Lane, it’s Neill. There have been plenty of Superman productions since the original went off the air on April 28, 1958, but no other Lois Lane worked for me. George Reeves, though… his image was replaceable.

So what happened after 1958. Another program I liked, Captain Video, had ended a few years earlier (it had a robot, cleverly named TOBOR I). My mom didn’t like the program much and often wouldn’t let me watch it because, she said, I wouldn’t sleep. 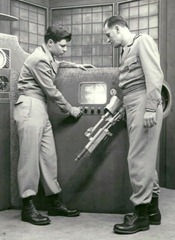 Captain Video—army surplus (?) uniforms and a spaceship with a TV set even older than the one I was watching it on (click for larger).
Of course I wouldn’t sleep. Not as long as I had fresh flashlight batteries. The comic books just kept coming. They were only 10 cents a copy, with many more pages than you get these days. 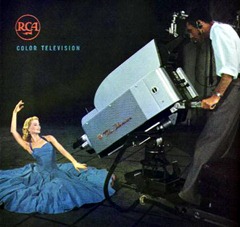 There was little violence in kids’ programs anyway. The worst was when the spaceship was attacked. I can’t remember if it was just meteorites or actual aliens out there. The camera crew would rotate the camera quickly to make it look like the spaceship was rocking, but kids were on to that trick. Nothing on the table ever shook or fell over. It must have been hard to do since those cameras were huge and very heavy.

There was Gabby Hayes and Howdy Doody. Winky Dink, the first interactive TV show in history, had already ended. Now, there was a dangerous program. It ended because kids were standing right at the screen drawing on the vinyl Winky Dink screen with their Winky Dink crayons and getting x-rayed by the picture tube. I had to have a Winky Dink screen. Without one, the characters walked through empty space from one cliff to the other. It was necessary that I have a kit so I could draw a bridge between the cliffs.

All those programs ended and left me with nothing. Only the vast wasteland lay ahead, and I seldom watched TV after that.  There were alternatives. For 25 cents on Saturday one could see three cartoons with free popcorn.

And there was no Superman in school, and homework left no time for TV anyway. I was supposed to use that time for spelling drills.

At some point I entered the real world, as kids must. I learned only much later that George Reeves apparently committed suicide. That was hard to take. Late-night comic books were replaced by the earpiece of a transistor radio and Jean Shepherd broadcasting on WOR late at night.

Sitting outside a conference room at the state legislature the other day made me think that this has all been an illusion. I never switched off the black-and-white TV.

Inside it was just committee chair Buffalo Bob and his Howdy Doody marionettes. The audience was his Peanut Gallery.

The words I heard didn’t make sense. I knew that these were respected elected officials, but who was writing their lines? No kidding. So I came home and reflected on the passage of time and all that. Superman was and remains necessary because we are still engaged in “The never ending battle for truth, justice, and the American way.” Really. Why else would I spend so much time at the legislature if not for the good fight? Why do advocates advocate? Superman was the consummate advocate. And it felt good when he won his comic book battles. All is well again with the world by the last panel of the last page.

Obama didn’t turn out to be our Superman, and neither did Abercrombie (though he tried, see below). 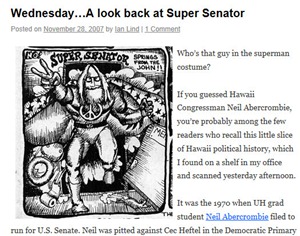 So we’ll just have to wait for the next politician to usurp that image. But today, I’m grateful to George Reeves and to Noel Neill for good times and inspiration all these years, and for fighting “The never ending battle for truth, justice, and the American way” for the rest of us.

Well written. Thank you for the descriptive trek down memory lane. While my memories of B&W television are not so vivid, I also was a voracious consumer of comic books. Superman, Batman, Archie and Betty, and all the Marvel hero's of course. Keep up fighting the good fight Larry! We need you and others willing to tell it like it is, and willing to show up when the call comes, armed sometimes only with the truth.