HONOLULU April 1, 2012—Governor Neil Abercrombie had been a consistent opponent of the Hoopili development that would displace farmers on what has been described as some of the best farmland on Oahu. See: Gov. Abercrombie’s reversal on Ho’opili development may rebound to Lingle’s political benefit (ilind.net, 3/17/2012).

As the article notes, there was no clear explanation for the Governor’s sudden turn in favor of the project. Quoted in the article is this corroboration in an earlier Civil Beat report:

Neil Abercrombie was against the controversial Hoopili development before he was for it, according to environmentalists who said they met with him before the 2010 election.

The candidate Abercrombie told environmental groups that he opposed the Ewa project during his campaign for governor, according to some of those present at a meeting they say took place at his campaign headquarters.

Disappeared News has been informed that it is the Governor’s love for Italian food that changed his mind. It seems that some of those hoping to move into the new development briefed him on their plan to use the small plots of reserved backyard ag land to growing a product that has so far eluded earlier attempts in less promising climates: they hope to bring spaghetti farming to Oahu. 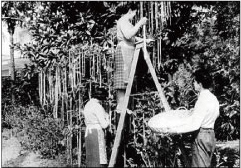 The concept is not new. It was first broached on a BBC program on April 1, 1957, but due to the poor weather in England, no acceptable spaghetti was ever produced.

Plus, the arrival of the spaghetti weevil from Switzerland put an end to further consideration of this potentially lucrative crop.

Finally, the BBC was wary not to reveal trade secrets and would not divulge the details of agricultural trials nor the ideal amount of marinara sauce that should be applied to the crop. As a result, there were never any plans to repeat the experiment.

Hawaii, and in particular the drier location proposed for the Hoopili development, is ideal for growing spaghetti, the Governor was told.

The concept of “steward farms” or backyard farms could support different varieties of pasta without climate issues, and the Swiss spaghetti weevil is still unknown here. Spaghetti must be kept dry, so the proximity of the ag plots to homeowners who would farm them is key to success. At the critical time just before harvest, if dark clouds threatened the ripening crop, homeowners could rush outside and harvest it before heavy rains hit. This would not be practical to do for the large area of commercial farms now utilizing the land.

While the BBC described only on an experimental spaghetti crop, it is conceivable that if the technology proves sound, Hawaii might move on to more lucrative lasagna-type noodles. Compared to DBEDT plans for a spaceport located on the Big Island, or to state government hopes for a financial exchange in the islands, this proposal appears to have better prospects of success.

It’s easy to see why the Governor might change his mind on the proposed development.

How about growing hemp and forget about the underwater cable.


On top of spaghetti, all covered with cheese, I lost my true lover, when somebody sneezed...fare thee well, gov!


Reminds me of the experimental dental floss farms of Montana... quite the dilemma