“Journalist and author Malcolm Gladwell ...defines a "tipping point" as "the moment of critical mass, the threshold, the boiling point." ...At the Legislature, community groups, environmental activists and just interested citizens are coming out against a series of Democrat-sponsored bills to temporarily drop many government safeguards from public construction projects.
The bills are presumably moving ahead with the blessing of Gov. Neil Abercrombie, titular head of the state Democratic Party, although two state planning agencies have opposed them. Legislative sources say Abercrombie is supporting them, while his office is officially noncommittal. ...
Tom Coffman, historian, author and journalist, says meddling with environmental legislation is risky. "Abandoning the environment, mining the irreplaceable resources, will put the Democrats of Hawaii on the wrong side of history. When the public figures it out, there will be a 1954 in reverse," Coffman said. The Legislature's strongest and most informed environmentalist is not some baby-faced, starry-eyed Democrat, fresh from college who just "wants to give back." It is 78-year-old GOP Rep. Cynthia Thielen, a veteran environmental attorney who battled the state over the development of the H-3 freeway.” 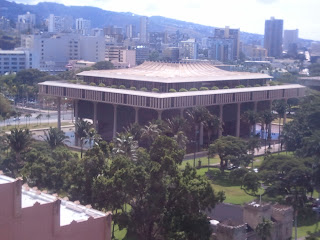 On April 10, 2012, the Hawai`i State House debated proposed bills for 10 hours. I sat in the gallery listening. Across a range of issues, from sexual abuse, to the environment, sunshine, energy and even construction, the top six Representatives fighting to protect the community were all Republicans led by Cynthia Thielen, Gene Ward and Gil Riviere. The next 10 included the other two Republicans and 8 Democrats:  Representatives Hanohano, Wooley, Chris Lee, Takai, Giugni, Takumi, Saiki, Keith-Agaran, and Awana.
The Democratic House leadership consists of Calvin Say (Speaker), Joey Manahan (Vice Speaker), Pono Chong (Majority Leader), Marcus Oshiro (Finance Chair), Cindy Evans (Majority Floor Leader), Mele Carroll (Majority Whip), Sharon Har (Majority Whip), Ken Ito (Majority Whip), John Mizuno (Majority Whip), and James Kunane Tokioka (Majority Whip).
While the House Democratic leadership professed that getting the construction industry back to work was their number one priority, that in fact did not mesh with their votes. Instead they were focusing on the big ticket controversial construction projects: rail, inter-island cable, transit oriented development such as the proposed 650 foot Kakaako tower, and airport and harbor overhauls.


The House was voting on the final versions of Senate Bills (SB) they had amended.
They voted to undermine the fastest growing sector within construction – the solar industry (SB 2288). They alleged that the reason was because they did not want taxpayers to be able to get two credits for solar. Yet they voted to give added breaks to those who already received generous tax breaks for buying electric vehicles (SB 2746). Solar installations decrease the alleged need for inter-island cable while electric vehicles may increase the alleged need.
No amount of explaining can lead to an understanding of the leaderships position on SB 2588 which would allow an additional two years to file legal actions involving sexual abuse of children, except for cases involving the State and the Counties. Honolulu led by former prosecutor Peter Carlisle supported the exemptions: “we believe that the current Statue of Limitations for claims against municipalities is fair and reasonable.” The Attorney General noted that excluding the government would create “a clear conflict with existing law.”  The Hawaii Catholic Conference opposed the bill: “while people often single out the Catholic Church for past instances of abuse, the problem is by no means unique to the Church. There is always the potential for abuse in any institution that deals with, supervises or cares for children. Studies actually indicate that the institutions most likely to foster an atmosphere of abuse are not private institutions, but public ones.”
The Department of Transportation (DOT) has had trouble obeying the law. Therefore the leadership proposed that they be given broad-based exemptions allowing them to ignore the law DOT (SB 755, SB 3010).
In the 1990s a hotel, residential subdivision, and golf course was proposed for Mahukona, Kohala. The Hawai`i Supreme Court found in Citizens for the Protection of the North Kohala Coastline v. County of Hawai‘i that since the construction of two underpasses under Akoni Pule Highway was an integral part of the Mahukona project, an environmental assessment was required. The Superferry also involved secondary modifications to DOT harbor facilities. These projects would be exempted from review (SB 2783)
Development near planned and existing bus and train stations would also be exempted from most state and county laws (SB 2927). This would allow dense urbanization to occur throughout the state against the interests of local communities.
The leadership proposes to allow multi-week overnight accommodations on agriculturally zoned land where bona fide agriculture coexists (SB 2341) This could lead to further urbanization of agricultural lands
To deal with the pesky public, the Adjutant General could order the National Guard to control the public for non-specific “nonemergency purposes” (SB 2489)
The House favors limiting sunshine/open government by allowing agencies to appeal unfavorable Office of Information Practices (OIP) rulings (SB 2858). Common Cause Hawaii testified that “this sets up a situation where government agencies will have the resources to fight to keep records and meetings closed, whereas most ordinary citizens won’t have the resources to fight to keep them open.” The bill was supported by DLNR and opposed by Americans for Democratic Action/Hawaii. Honolulu Managing Director Douglas Chin testified that the bill does go far enough in allowing agencies to resist. Agencies should be able to slow down the whole OIP process by intervening in potential actions.
In 2011 the State Auditor found several Charter Schools were involved in unethical and illegal activity. Although Article XIV of the State Constitution mandates that the Legislature adopt a code of ethics that applies to employees of the State, and members of state boards, the Democratic leadership proposes that Charter Schools develop their own standards (SB 2115)
Throughout the U.S., quasi-governmental reliability councils regulate reliability standards for electric grids. HECO is the only utility in the U.S. that regulates reliability standards. No state or state PUC regulates reliability standards anywhere in the U.S. Increasing the state bureaucracy, the leadership proposed that the PUC handles the regulation of reliability standards in Hawai`i (SB 2787)
Allegedly, in order to protect electric ratepayers from unreasonable financial impacts, the leadership voted to allow the Public Utilities Commission to rely on the Hawaii Natural Energy Institute to determine which utility projects are or are not technologically feasible (SB 2438).  This bill has a great potential for abuse. Cost is not considered in determining if a project is feasible. HNEI works closely with HECO, was an early proponent of Big Wind and would be put in charge of determining which projects are acceptable. Leon Roose has just retired from HECO and was hired by HNEI to work on these issues. On the other hand, the legislature was unconcerned about the costs associated with the billion dollar inter-island cable.
Last year the interisland electric transmission cable bill failed (SB 367). This year the leadership broke it up into pieces. Thus one bill looked only at developing the regulatory framework (SB 2785), another bill proposed fast-tracking and automatic approval for inter-island telecommunication lines that would co-exist with the electric transmission cable (SB 2235), they also voted to curtail new solar (SB 2288) and to fast tack geothermal explorations through broad exemptions, undercutting the Environmental Council which is currently reviewing under what conditions should the regulations surrounding geothermal exploration be streamlined (SB 3003).
In the next few weeks the House and Senate will hold Conference Committees to work out the final language in various bills.


Call your Senator, let them know how you feel about these bills.

Since HNEI is almost entirely funded by HECO, I would say not that "they work together closely" but that HNEI is RUN by HECO.


Great compilation, Henry. Thank you.
A big part contributing to these decisions is legislators that are unqualified in every aspect of what it takes to reach sound decisions. The other part is legislators that are too weak and easily compromised through personal ʻthreatsʻ.
They come to believe it is all about them once they get their ass in the seat.


Thank you Henry. Smashing digest of our politico's activities and positions. [Head up okole with hand extended in order to be greased] How much are we paying these groveling swine?