The House Finance Committee passed SB755 with amendments very late last night. Neither the amendments nor the committee report are available yet on the Capitol website (in fact, the last committee report posted on this bill refers to one of its previous lives as a gambling bill).

Depending on what’s in the amendments, the bill, if passed into law, is likely to have the opposite effect from its proponents’ intent—instead of speeding up economic development, it could mire projects in legal actions. This point was raised a couple of times during testimony.

The committee hearing was a potential setup for future lawsuits. While the title of the bill is “Relating to Economic Development,” little to nothing in the hearing related to economic development. Instead, questions by committee members were focused on dismantling Hawaii’s environmental protections. Not a single dime was identified that would be earned by doing so.

Upon questioning by Rep. Ward, asking for that “Project X” that the bill would benefit, the representative from the Department of Transportation was unable to come up with anything with a money value. The best that she could do was to say that it would simply the DOT internal processes by removing some of the redundancy—that is, they would not have to prepare both federal and state paperwork.

A few testifiers noted that by bypassing the environmental protections provided in Hawaii’s state constitution, projects that are exempted from Chapter 343 (of Superferry fame) could be challenged by opponents. This could result not in a speedup of “shovel ready” projects, but a slowdown.

The only shovel-ready projects mentioned were bridge repairs, and it was also noted that emergency exemptions are and have been available to the DOT if necessary for that purpose.

Gary Hooser, Director of the Office of Environmental Control, testified that there were no projects currently submitted by state agencies that are waiting for exemptions.

In other words, whether or not SB755 passes, there is no economic difference. 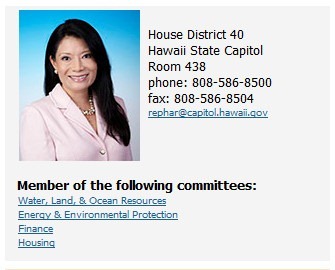 o why pass the bill? Rep. Sharon Har was the most aggressive in promoting the bill, even to the point of extensively questioning a citizen testifier on the bill line-by-line. Har held that the community has a misunderstanding about the bill as a “blanket” exemption from environmental protections. Rep. Ward interrupted the interrogatory with a point of order to the Chair.

Still, neither Rep. Har nor anyone else on the committee was able to put a dollar value on the economic benefit. So what’s left … is a blanket exemption to environmental protections. The `Olelo video of the hearing should be posted and could be used to demonstrate that the legislative intent was to figure out how to find exemptions. And therein lies more lawsuit fodder.

The language of this bill has morphed from a nice enough bill to a gambling bill and now to an environmental exemption bill. The new language has not been heard for the required three readings in each house, although the Legislature argues that if the title is the same, it is enough. And finally, the bill did not demonstrate any economic development, since it is focused on environmental exemptions. A judge may not agree with me, but the irregularity of the House process could conceivably bolster any case filed against the exemptions it provides.

So who voted for this bill?

The bill next goes to conference, unless the Senate agrees to adopt its language as-is.

PBS Insights covered SB 755 tonight. Calvin Say and William Aila, Land and Nat Res. sounded like a rehash of the national republican agenda ...we want to streamline the process so we can get these funds and provide jobs.
Robert Harris, Sierra Club and Gil Rivière R. Countered with you already have the authority to repair lower cost projects without changing any laws. There are no projects pending special approval. Say kept bringing up scholl repair and redundancy and time consuming approval process. Harris countered with repair work exempt and Rivière or Harris mention DOT has sat on three or four projects three or fours years that have already been approved. Ditto on Maui Airport except there the DOT wants to put a fuel tank in a Tsunami zone. DOT is negligent in using the application process and there was a mention about the Hilo harbor expansion and DOT not willing to do environmental studies. Recently DOT "fixed" a road in Kahaluli that suffered storm damage and managed to ruin a beach in the process. Did not do environmental study?

My understanding is Har was reading off a script prepared by LURF, the Land Use Research Foundation, the mouthpiece of landowner and development interests. The woman she tried to embarrass for standing up for our environmental safeguards is a librarian visiting from a neighbor island who had the authenticity to speak the truth as she saw it without the benefit of a well-funded corporate lobby to feed her lines.

Har is an embarrassment to her district and it is a sign of the dysfunctional nature of her district that she has been re-elected. Unfortunately, I doubt they will wise up and get rid of her.


So do we know exactly what this bill is going to do to the economy... and us? Who and why would they vote for a bill that has nearly no economic value