It was quite an experience for me to watch the Dalai Lama via streaming video. Of course, the view and the sound quality were better sitting here at home facing the computer monitor than anyone attending in person could have experienced.

It’s kind of mind-blowing to be so close. The last time I was in a room with His Holiness was when he was in Honolulu on a program with the late Rev. Mits Aoki. The sound was not bad, and I had a seat in middle of the crowd. Those in the back, though, might have needed binoculars to see well. True, we had a chance to shake his hand as he moved through the room after his talk. And then what—do you ever wash that hand? Has his touch changed you?

That’s the way it used to be, for all the millennia before Ustream. If you wanted to hear Cæsar, you showed up at the Forum. No chance to shake his hand, though. To consult a guru, one climbed the mountain, there was no chat box on his web site.  But now… it felt natural to me to be sort of face-to-face with one of the world’s most famous and revered religious and political leaders.  Anyone viewing from home or even on a smartphone was closer to his presence than anyone attending the event in person.

If you know how, you can also record streaming video and keep your own copy, or view it later. For the Dalai Lama, I hope someone will post a video on his website later.

Another sign of the times. When I googled earlier today, I found this:

Yeah, it looks like Pierre Omidyar, who sponsored the Dalai Lama’s trip to Hawaii, also owns his name as Google key words. Other ads that came up: 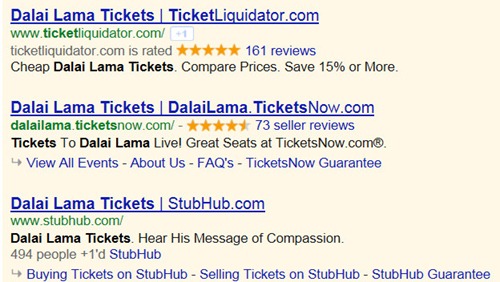 I see very few ads at all, but the text ads were still there. I don’t know why, but seeing the Dalai Lama’s name used for advertising (“Cheap Dalai Lama Tickets…”) just rubbed me the wrong way, after the experience of watching the streaming video. So I took the opportunity then and there to opt out of Google advertising. Even the Civil Beat ad seemed objectionable to me.  So, no more Civil Beat ads. Ever.

It would be great if the videos were posted somewhere so that everyone could attend, independent of distance and time. That’s another remarkable gift of technology. Couldn’t get tickets? No problem. Grab some popcorn, speaking of irreverence (I won’t even suggest a beer), push back the keyboard and be enlightened, at your convenience.

Meanwhile, there’s coverage at Civil Beat, and also at the Dalai Lama’s own website.