Got clean underwear on? Supremes give police new way to harass—strip search anyone on arrest


“ ‘Turn around,” Mr. Florence … squat and cough. Spread your cheeks.’ ‘I consider myself a man’s man,’ said Mr. Florence, a finance executive for a car dealership. ‘Six-three. Big guy. It was humiliating. It made me feel less than a man.’ ” 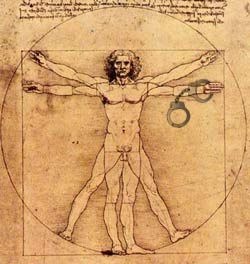 Before going out to protest, better make sure you have clean underwear and socks on.

The Supreme Court just fired a warning shot across your private parts. Your undies (and in fact, everything) are now subject to exposure with today’s decision that police can strip search anyone for anything, after any arrest.

The Court just gave police a brand new way to harass anyone they please:

The Supreme Court on Monday ruled by a 5-to-4 vote that officials may strip-search people arrested for any offense, however minor, before admitting them to jails even if the officials have no reason to suspect the presence of contraband.

Under Monday’s ruling, [Justice Kennedy] wrote, "every detainee who will be admitted to the general population may be required to undergo a close visual inspection while undressed."

Now police will be able to set up assembly lines to strip search anyone and everyone they arrest at protests, peaceful demonstrations, or even traffic arrests. Don’t think they won’t do it.

In Hawaii, had this Supreme decision been in place, the parents waiting in former governor Linda Lingle’s waiting room to see her, whom she had arrested (instead of just popping out to meet them), could have been subjected to strip searches. Pesky parents. That’ll teach ‘em.

Occupy protestors here and everywhere can now count on being humiliated as a lesson.

Strip searching will become a police tactic to suppress all kinds of dissent. It’s a safe prediction.