When Obama was Candidate Obama he supported women’s right to choose. It’s right there on his change.gov web page: http://change.gov/agenda/women_agenda. Yes, women-agenda.

Now his Office on Women’s Health is tapping Curves, headed by CEO Gary Heavin, a leading anti-abortion advocate and funder, as a partner in promoting Women’s Health week.  Poor choice.

Maybe he just missed this one. The alternative press has noticed, so let’s see if he makes any changes. But don’t hold your breath. This president has been very flexible with his promises.

Heavin, a born-again Christian, has been outspoken about his opposition to abortion over the years, and has given hundreds of thousands of dollars to organizations that support so-called crisis pregnancy centers that aim to discourage women from seeking abortions. "There's nothing healthy about abortion," he told Today's Christian in a 2004 interview. "I'm not afraid to tell the truth." He was also critical of abortion in an interview with Women's eNews in 2004 that also noted Curves was one of the first companies to pull support from Susan G. Komen for the Cure over the grants it provides to Planned Parenthood for breast cancer screenings—an issue that's been in the news quite a bit of late:

In 2002, however, Heavin flexed his financial muscle by pulling support for the Susan G. Komen Breast Cancer Foundation's fundraising events, such as Race for the Cure, because he opposed the foundation's support of Planned Parenthood.
…
Curves also drew some attention in 2009 for partnering with the American Family Association's radio programs, a pro-life and anti-gay group

What does Curves get out of this deal? Plenty. According to the Memorandum of Understanding uncovered by Mother Jones, every Thursday in National Women’s Health Week will be National Curves day, and more: 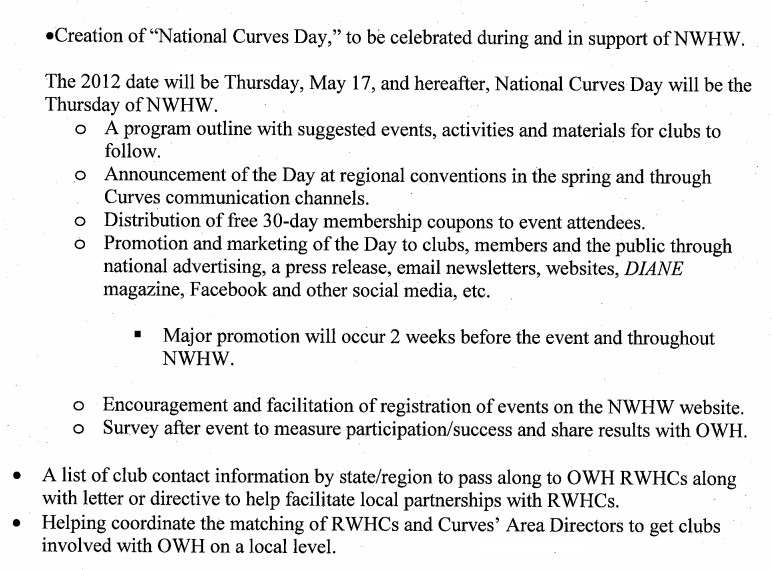 [For you namephreaks out there, isn’t Heavin a perfect name for a born-again Christian?]

For those unfamiliar with Curves, it is a women-only fitness center franchise chain that has grown hugely across the country. It can be found in shopping centers and strip malls across suburban America. The 30-minute circuit-training design has proven immensely popular. And part of its profits go to fund anti-choice causes through the activities of its CEO. Go figure.