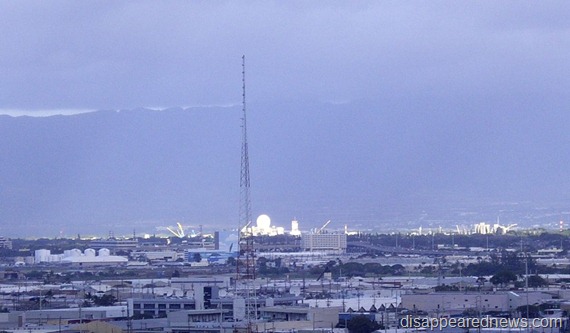 I don’t know why this thing fascinates me. It’s so big, so round, so white, so powerful… and it is totally wasted by being parked at Pearl Harbor instead of doing what it was designed to do, track missiles off the icy cold coast of Alaska. What happened—are there no more missiles to track? (Were there ever?)

I hope, at least, its crew is enjoying their prolonged stay in Honolulu.

This radar is so powerful that it is reported that it can track a baseball on the East Coast from where it sits on the West Coast.  Could it call strikes and balls at Yankee Stadium? At least, high flies?

According to a newspaper article, it “will be available for missile tracking purposes if it is needed.” Sure. Are they going to keep it plugged in and running in Pearl Harbor? Not likely, it would likely interfere with communications. So do we wait for N. Korea to launch before sending it out? Obviously, that wouldn’t work.

The radar cost about $1 billion dollars. That was taxpayer money, of course.

It would be great if there were a use for it while it is here. Could it roast large batches of ‘huli-huli’chicken? if aimed just right?

Could it catch a few red-light runners?

Maybe it could help find lost balls at the golf courses.

How about locating  schools of fish to catch? Could the government sell ads to be placed on that shiny dome? There has to be something it could do to earn its unemployment benefits.

I would love to see your reaction at a Jack-In-The-Box restaurant when Jack walks by.


Never was in one. I guess Jack must have a big round nose?