Update: Tweet from Street Grindz: The amendment to Bill 59 has passed! The final hearing is March 21. Thank you everyone for your support. All your testimonies made a huge difference. The journey isn't over yet but at least we're half way there! Thank you everyone, we love you all very much. 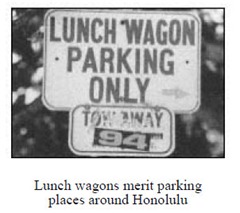 This photo is snipped is from a 1966 University of Hawaii Press book, The Food of Paradise : Exploring Hawaii's Culinary Heritage, by Rachel Lauden. The book is unclear as to whether this is an actual Honolulu sign or just that the author thinks there should be such a sign.

Maybe we’ll get there one day.

In the meantime, a skirmish has been underway at the Honolulu City Council that you may have read about. Police were ticketing food trucks for parking too long in one spot. A bill introduced to the Honolulu City Council was supposed to fix that and allow up to two hours parking, but a poison pill was inserted in that food trucks would pay a heavy penalty if caught for traffic infractions. Why we would want our police department chasing down errant food trucks instead of speeders and cellphoning SUV drivers, I don’t know. So the pressure was on to get the evil out of that bill.

I understand from Camille of Camille on Wheels that Bill 59, to be heard by the City Council on Thursday, March 1, could be amended to allow street parking for three hours and eliminate all the evil stuff about cops chasing food trucks for traffic violations, etc. Apparently the forces are gathering there at 1 p.m. on Thursday. Won’t you join them?

The Food of Paradise book has some incidental history of food trucks. For example:

The book credits lunch wagons for the origin of the plate lunch, the centerpiece of Hawaii local food:

There is some speculation in Hawaii that the plate lunch evolved from a cross of the lunch wagon and the bento, the traditional Japanese packed lunch that the plantation workers took out into the fields.

While ethnic food prevailed in the home, it was the lunch wagons that were selling food on the plantations starting in the 1930s that promulgated local food, according to the author.