A couple of dilemmas for Hawaii’s Ethics Commission


“ ‘If a legislator attends, then so what? What would you do to them?’ Commissioner Knudsen asked during public discussion.

[Executive Director Les] Kondo replied the Ethics Commission response could range ‘from a light slap on the wrist up to a charge.’

A review of the Commission's response to previous violations, including acceptance of gifts and misleading info on financial disclosure forms, indicates that legislators have nothing to fear except perhaps the publicity and inconvenience of an investigation.”—comment by Holly J. Huber to Civil Beat article

Let’s take a look at a couple of situations involving the Hawaii State Ethics Commission. One relates to the discovery of a financial disclosure form that begs for explanation, the other relates to that Taste of Ag extravaganza and the Commission’s handling of it.

Ian Lind, ever vigilant, has discovered another case of apparent, possible, who knows, alleged fraudulent filing of a financial disclosure form. Ian didn’t characterize what he described. A good reporter, he posted just what he discovered in his article today, UH West Oahu chancellor sidestepped required financial disclosure (ilind.net, 1/31/2012).

Actually, there are two forms in question—the blank income disclosure form filed in 2010 with the State Ethics Commission by UH West Oahu Chancellor Gene Awakuni, and the 2011 short form filing indicating “no change.” Ian’s research indicated that necessary data did not appear on the forms.

This article is based on Ian’s, so please read that first.

Ian posted a link to the form on his website. You can see how blank it is. However, at the Ethics Commission office, you can see that at the bottom of a block that reads…

Now, Awakuni has not had a chance to respond, and may or may not do so.

This discovery raises Dilemma 1 for the Hawaii State Ethics Commission. Here is how I read it.

Part B: Will the Ethics Commission now take action? Will it just ask for corrections from Mr. Awakuni, if the filing is as problematic as Ian has described? When Ian discovered a similar situation with regard to Senator Clayton Hee last year, the Commission at first replaced one “erroneous” form with a new one submitted by Sen. Hee and later posted both the originals and amended versions covering several years to their website. That appeared to be the end of that, until I filed a complaint.

My guess is that nothing will be learned unless a complaint is filed. So (sigh) I’ll try and do that later today. It’s not just something I can email—they require that the complaint be notarized.

I think we owe a great deal of thanks to Ian for his willingness to dive into these files and do the research.

If the Ethics Commission is able to commit some budget to it, they could get assistance verifying the data submitted to them. This is not rocket science. I have ideas of how this might be done. You probably do too.

The Gift Law alone is ineffective to prevent selling influence

Ok, on to the second Dilemma.

If you recall, there was a bit of a dustup around the invitation state legislators received to attend the “Taste of Ag” event staged by the Hawaii Farm Bureau and the Hawaii Crop Improvement Association on January 11, 2011. I understand that this is an annual event. In any case, the admission fee was pegged at $50, which clearly violated the state’s gift law.

We are writing to advise legislators that based upon the information that we have received and reviewed, it is our opinion that the State Ethics Code prohibits the acceptance of this invitation by legislators.

The event featured a superstar chef, Chef Hiroshi Fukui from the fancy Hiroshi Eurasian Tapas restaurant. It was hosted right across the street from the State Legislature on the grounds of the Hawaii State Art Museum. The organizers are  organizations with a big stake in legislative actions this and every session. See: First ethics challenge of the 2012 session—state legislators warned not to attend farm feast worth $50 in fancy food, 1/10/2012)

Sure, maybe legislators had become accustomed to attending the annual event, but maybe also no one had clarified the gift law for them. Les Kondo did that. But next thing you know, the Ethics Commission undid its ED’s warning:

In an 11th-hour decision, the Hawaii State Ethics Commission has given lawmakers the green light to attend an event later this evening hosted by two lobbyist groups. But the legislators have to pay the estimated $50 to attend.

The decision followed guidance issued Monday by the commission's executive director, Les Kondo, who wrote that commission staff believed "the State Ethics Code prohibits the acceptance of this invitation."

Perhaps the Commissions decision was the correct one, but in any case, they effectively threw their ED under the bus. He said no, they said yes.

And some legislators did attend. Here are a few pics. You can spot some, and I’m sure there could have been others I have missed. 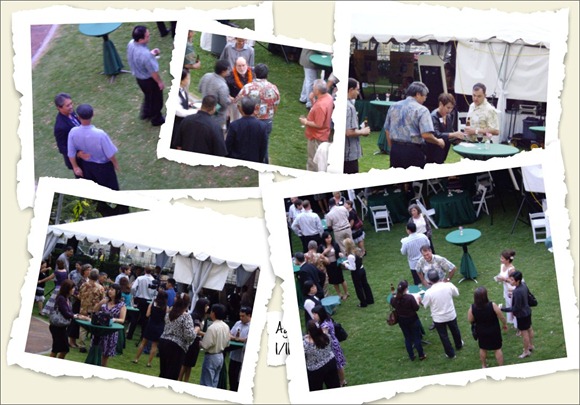 So where’s the dilemma?

If the only weapon the Ethics Commission has to separate public employees from lobbying events is the gift law, it is now defanged. In other words, a law limiting gifts has been used to limit influence, but is no longer effective for that purpose.

Why “defanged?” Because the “gift law” as now interpreted that if a legislator pays the admission fee they can get into virtually anything, there is no longer an effective way to prevent attendance at events similar to the Taste of Ag. It will be hard to say why it is ok to attend that event and not another, similarly constructed.

The event was clearly designed to influence legislators. Given that, it actually doesn’t matter if the stated admission fee is $50 or $25 or $1,000. Disappeared News highlighted several events held at the posh Pacific Club where the cost of the meal and room charge is generally known and not at all cheap. Is it really just a question of whether legislators have to pay to get in? With regard to the Ag event, how much did it really cost, divided by the number of paid attendees?

The Ag event was a private, invitation-only event held on the lawn of a public building (though supposedly closed to the public) and indeed attended by several legislators, and it was a magnet for lobbyists as you would imagine. A couple were caught in the pictures. At least one of the organizers is a registered lobbyist herself.

If it were just a bunch of farmers offering fresh kale soup that would be one thing, but the fancy waiters, celebrity chef, circulating lobbyists and venue next to the State Capitol demonstrate that the event is at least in part aimed at delivering influence.

I decided not to identify the legislators or staffers in the pictures above. After all, they had just been told it was ok to go sample all that great food and even meet the celebrities assembled for them. I did learn that at least some have gone to each annual event, always paying the $50.

Ok, no violation of the gift law, then.

But that $50 can be charged to campaign contributions. It seems to be legit under the law if I am correct. So (1) some contributor’s donation paid the admission for the legislator, and more important, (2) their attendance can pay off big time in further contributions. I started a spreadsheet to demonstrate the profits, but since I’m not going to give names, let me use just one example.

For each legislator, I looked up how much their campaign gathered from identifiable ag contributors in 2010, just as a start. Considered as an investment in future contributions, the return on investment is not bad at all for some.

One legislator paid $50 and got nothing back, but check out the ROI on the example above. And that was only for 2010. This election season has barely begun.

So they can now pay to get in, charge it to campaign funds, and collect hugely larger donations later.  Great ethics law, huh? Indeed, we could use better campaign finance laws as well. I can’t see how this can be prevented without meaningful reform.

The big picture, and the ethical problem, is that it’s not paying the admission fee that is the issue. The problem is the system of influence.

Of course the legislator highlighted above will attend every year. It would be foolish not to.

Les Kondo might suggest, next time he is asked, “just charge the admission cost to your campaign fund and don’t bother me.”  Less trouble for him, and he might then have more time to spend checking disclosure forms.