With all the problems facing humanity today, I thought it important to learn whether more people poke at their smartphones going down than going up. And since I was making several trips to the laundry room, it seemed like a perfect opportunity to begin the research.

Indeed, of six trips, three up and three down, no one on any of the up trips was messing with their smartphones although one person was holding a phone that might have been smart.

On the down trips, of 14 people (we had only one elevator in service yesterday) going down, nine people were either looking at or poking at their smartphones. One of those was listening via earphones during the trip.

There’s an interesting anachronism in play as well. Except for one elevator, the eight elevators in our condo are all guided by vacuum tubes. Here’s a circuit card with two tubes, removed from the control circuit of the one elevator that so far has been transistorized. 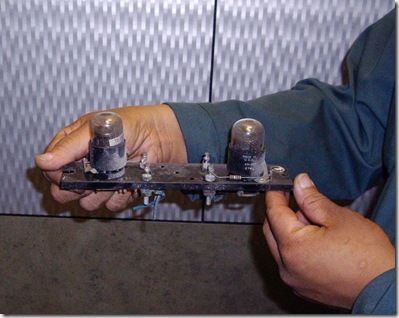 The tubes aren’t being discarded (I asked). It seems that there are plenty of elevators in Honolulu still running on vacuum tubes. Although these tubes are a special long-life design, every so often one might go dead. And it’s not possible to take them down to the nearby Longs drugstore to have them tested, so the quickest thing to do is to substitute for another. 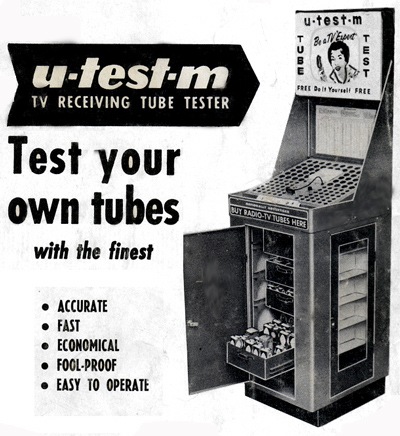 For those who’ve never had the experience, here’s how it used to go.

When the TV stops working, your father goes around the back and peers through the holes and slots in the Masonite panel that invariably served as the back of these units. When he spots a vacuum tube glowing blue, he turns off the TV, ignores the warnings about waiting for the high voltage to dissipate, and pulls it out, burning his fingers a bit (or using that kitchen towel he was told never-to-use-for-that-purpose-again). Hurrying up was important because the kids would be anxious if a favorite program was about to start.

It was somewhat dusty inside a typical TV. I never met anyone who cleaned inside the TV except when tubes needed changing, if then.

Then off to the drug store with it. Drug stores universally had these consoles called Tube Testers. They may not have had a soda fountain, but they all had tube testers.

The back panel of the tube tester had a list of tube numbers and the socket to put them into. For example, a 6J6 might go into socket A8.  Then you hold down a button or flip a switch and look at a light or a meter. If it said “good”, that’s not the tube causing the trouble. If it said “bad,” you selected a new tube from the cabinet below and waited impatiently on the checkout line, then rushed home with it. If the exact same tube wasn’t available, there was a handy table of “equivalents.” Unless you knew a little, it was a bit of a risk to try one of those, but usually it worked ok. The alternative was to get into the car and drive to another drug store to see if they had the tube you needed.

Some testers had a meter which was a bit more difficult to read, so it was a lesson that a father could teach a kid if they went to the drug store together. If the filament had burned out, you were home free—the tube was clearly dead. The problem was if was still limping along. How much plate current is enough? Better to have that “good” or “bad” signal than the agony of deciding if a marginal tube really needed changing, accompanied by the suspicion that you have pulled the wrong one and would have to start yanking the rest of them. The tubes in metal jackets were particularly vexing because, of course, they didn’t glow blue when they died.

Before you start pounding me with angry comments—yes, generally speaking, it was a father’s job to change the tubes,

And while some boys in my neighborhood probably looked forward to being Bar Mitzvah’d, possibly many more looked forward to that rite of passage when at last he would be allowed to pull out a bad tube by himself and take it down to the drugstore without daddy.

And the satisfaction of plugging the TV back into the wall (assuming the kid remembered to unplug it in the first place) and turning it on to see a clear picture blossom on the screen–was unforgettable.