Yesterday at the Asia Pacific Economic Cooperation (APEC) forum I asked Governor Abercrombie: Are there any downsides to APEC? He replied: “Not for us.” He also said: “Hawai`i is right at the center of the Asia Pacific region” and “Hawai`i is going to be an anchor for all of this.” He added: “There are a whole bunch of people out there who don't believe were making this progress.  There are a whole lot of people, I'm sorry to say, a vested emotional interest in always seeing us on the losing side.”
Quite depressing, distressing and uninformed. That’s our Governor. There is only one solution for our democracy, and that is his vision of Big Projects, Tall Skyscrapers, Interisland Transmission Lines, Global Capitalism, and those who have a different view of the future are wrong. 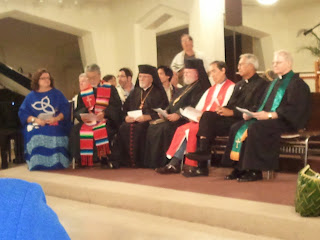 Last night I attended the Faith Action for Community Equity (FACE) and the Interfaith Alliance Hawaii (IFAH) which offered an Interfaith Service addressing the  APEC and Justice, held at St. Augustine by the Sea, Waikiki.
The emphasis was on building a moral future and respecting people.
Imam Ismail Elshikh, prayer leader and teacher of the Muslim Study Center of Hawai'i: You can’t have poor people without stingy rich people.
Bob Miyake-Stoner, Pastor at the Trinity United  in Pearl City: “The United Methodist Church has a long history of public witness on matters of economic justice. Our founder in the 18th century John Westlake, set the example in his public stand against slavery and is his standing with England’s working class. Our current social principles state the following: we claim all economic systems to be under God.”
Stephen Randolph Sykes, Bishop of Hawaii at the Inclusive Orthodox Church: “No Christian ethics supports slave labor wages. Corporate greed sends jobs to the countries that offer the cheapest labor and inhumane working conditions. Christian Justice demands a living wage, not a minimum one. Even in Hawai`i its hard to find  a service job that pays a living wage. We are commanded to feed the hungry, and give drink to the thirsty, yet we give little to share the Earth’s bounty even within our own community. ...We ask for forgiveness for removing the homeless from Waikiki for the sake of appearances without compassion for the homeless have nowhere to go.” 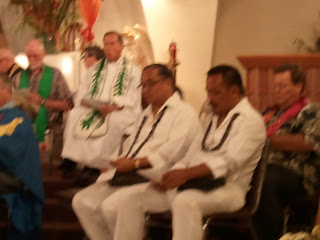 Kerry Grogan, Pastor of the Christ Church Uniting Disciples & Presbyterians in Kailua: “In 1908 in the midst of the Industrial Revolution, people of faith got together and decided that faith communities needed to stand up against child labor, against unfair employment, against economic woes. Today we find ourselves in an era of globalization and we gather here tonight to offer this ... of a society that shares more and consumes less. That seeks compassion over suspicion, equality over domination, and finds security in joining hands.”
John Heidel, United Church of Christ Minister and President of Interfaith Alliance Hawaii (IFAH): “The United Church of Christ has made regular pronouncements and resolutions about the global economy. They have repeatedly drawn distinctions between the so called free trade agreements that our nations leaders  have and the fair trade possibilities needed by the world. Very important distinction. [In 2009 the UCC] adopted two statements that advise and encourage participation from our local congregations. The first is a resolution that states: ‘The economic and environmental injustices of todays global economy,  require churches to respond as a matter of faith, in engaging injustice as an integral part of our witness and mission.’ The second action was the adoption of the act of confession in the world alliance of reform churches that states: ‘We believe that God is sovereign over all creation. Therefore we reject the current world economic order imposed by global capitalism and any other economic system, including absolute planned economies, which defy God’s Covenant, by excluding the poor, the vulnerable, and the whole of creation, from the fullness of life. We reject any claim by economic, political [and] military empire which subverts Gods sovereignty over life and acts contrary to God’s just rule.’”
Rev. Dr. Jonipher Kupono Kwong, Minister of the First Unitarian Church of Honolulu: “Unitarian Universalists have a long history of fighting for justice, because our principles call us to respect the inherent worth and dignity, of every single person. It also calls us to exhibit boundless compassion by building a world community where peace, liberty and justice reigns. Tonight we carry on the Unitarian Universalists  legacy of fighting for justice, by establishing the theology that  that calls for a new economic order. I realize that poverty, homeless and hunger  do not just happen by accident. By our deliberate actions and inactions we create economic injustice. Likewise by our actions we to can create economic justice. Too many, too poor, for to long equals two choices and only two, redistribute peacefully or redistribute violently. Unfortunately because too much is never enough, and the wealthy never let go, violence has historically been the call of action. As a clergy person I’m certainly not advocating for violence, but rather healing to all of our good natures, to focus instead on a peaceful means of redistributing income.”
Monsignor Terry Watanabe, President of FACE Maui and Pastor at St. Theresa Church in Kihei: “We at FACE and the Interfaith Alliance want to remind the leaders who gather this day and this week here in Waikiki for our APEC. ...We can do better that the results of past trade deals, better on the environment, better for the workers and better for the people as a whole.” 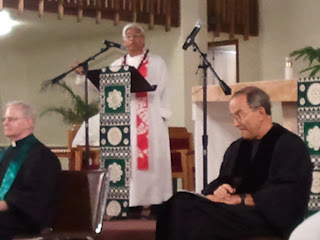 Sam Domingo, Pastor of the Keolumana United Methodist Church and President of FACE Oahu: “We are an awakening force! ...They will know who we are! ...Our message to APEC this week, and to the leaders and to the businessmen and to the bankers is watch out! We are here! Our voices are not being muted! You need to pay attention to us, but here is the implication. Come, come and find out who we are, get to know who we are, get to understand our living situation, get to understand our own theology by which we live out our lives, and then perhaps, in some sense you might understand who we are, and then you might not want to exploit us. But you might want to join us. Thus you can be transformed yourself, into one of us, who embraces life, embraces others, and cares for all, for all of the world. Let it be so. Let it be so.”
Faith Action for Community Equity (FACE), a Gamaliel Foundation affiliate, is a faith-based grassroots organization in Hawaii founded in 1996. FACE grew out of a sponsoring committee established in the mid-1990s with the assistance of the Center for Community Change. In November 2008 FACE became a statewide organization when our Maui chapter was founded. We currently have a membership base of 27 institutions on Oahu, 24 on Maui, and one statewide institution. Combined on both islands, we are made up of 38 churches, a Buddhist temple, 2 Jewish congregations, 10 community groups and non-profit organizations, and one labor union. FACE’s membership reflects the cultural and socio-economic diversity of our community.
FACE exists to allow its members to live out our common, faith-based values by engaging in actions that challenge the systems that perpetuate poverty and injustice. We balance social, economic and community activity with a deep spiritual commitment. Our spiritual centeredness empowers us to return hope and love to the public arena.
While rooted primarily in religious congregations, FACE invites the membership of other community groups as well. A church or civic organization is accepted for membership when the senior pastor, church council, or equivalent body formally signs our Covenant Statement.
The Interfaith Alliance Hawai‘i (TIAH) has risen to be a voice for justice in our state.  It is an organization of individuals that speak from the perspectives of over 30 faith-based traditions.  TIAH is designed to create an environment in which many people and groups of good will can come together to address public concerns. TIAH is a chapter of the national group located in Washington, D.C. that is honored to have received a mantel of support from the former Hawai‘i Council of Churches.  In addition to the Executive Committee, TIAH has a diverse 25-member Board of Directors, representing many religious traditions and community groups.  Also, an Advisory Council of distinguished religious leaders has been formed with the purpose of providing wisdom and counsel.  The momentum of TIAH is dynamic and exciting. Together, this uniting of diversity aims to provide a meaningful place of respect, understanding, and harmony in our land of aloha!

thank you for covering this event -- and highlighting some of the people of faith doing critically important work in our community. I am not religious (Catholic by birth, now atheist) but I have a lot of respect for these people who are taking the position of standing with the poor and oppressed in our world (WWJD) and their voices reach many people.