Star-Advertiser position: Waikiki protestors should have been prosecuted (!) 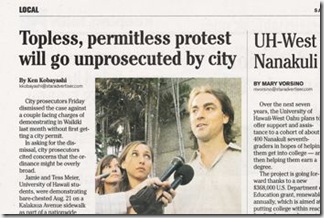 On most newspapers the reporter does not write the headline, so we don’t know if this is the position of reporter Ken Kobayashi.

But not only did a Star-Bulletin editor write the headline, but someone else approved it for printing.

Unless the boss had already gone home for the weekend.

What does permitless protest will go unprosecuted mean to you? It’s more than a report or an inference. It’s a statement of opinion at best, which doesn’t belong in a news article. What it means to me is that the editors think that these two protestors should have been prosecuted.

Suppose the newspaper, referring to the trial of the Aloun Farms brothers Michael and Alec Sou, headlined the story of the dismissal of charges due to prosecutor’s error “Alleged Aloun Farms human traffickers will go unprosecuted”?  The meaning is clear. And I use this example deliberately, because there was enough evidence introduced to suggest the case could have been tried. Still, the paper did not take the position there that it did in today’s article.

The ACLU and attorney Matthew Winter were defending the Meiers on several grounds, including their first amendment right of free speech. There is little reason to suspect that a prosecution would have been successful in this case, or that any permit should have been required, even if one or more Star-Advertiser editors seem to think otherwise.