Is the amount, er, number of errors really decreasing in our daily paper? 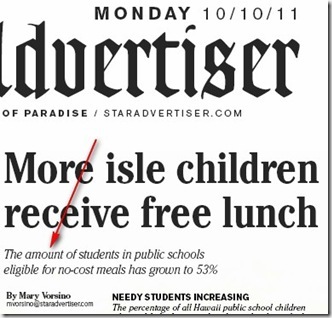 I keep wondering, as I read my Monday paper, if Star-Advertiser editors have taken the weekend off.

Here’s a snip from today’s front page. Note the glaring grammatical error. “Number” is used for countable things, “amount” is for things with mass, for example (with the one exception of money—we can say “amount of money”).

It’s a good thing APEC visitors can’t Google to see the Advertiser. This point of grammar is taught in English classes everywhere.

And while most people know that reporters don’t write their own headlines, still, this error is on an article written by Mary Vorsino, the paper’s education writer. She probably knows who wrote the sub-head, perhaps she might have a word with that person.

Although I don’t keep track of errors, I think the number of egregious typos has decreased slowly over time, along with headlines that mean the opposite of the story they introduce. What we still have is selection bias, and at times curious aggregation of the news. By that I mean the editorial selection of stories that are so remote from any Hawaii interest that I wonder if they were just pasted in to fill an empty space.  Even then, I have to admit that sometimes I find the stories interesting anyway. Also, the aggregated news is an improvement when compared to the slim column of national news on page A3 in the old Advertiser.

But heck, you’d think even over the weekend someone could pay better attention to the editorial polish of our one remaining daily paper in Honolulu.


I wish I could agree that the number of typos is going down but it's not. It's getting worse, as is the number of factual errors. Although it's a manini thing, my favorite is a reference on the editorial page this summer to the April tsunami and earthquake in Japan. Uh, it happened in March, March 11 to be precise. I write the editors all the time about these things, asking if they need a copy editor or a proofreader. Not surprisingly, no response. And no improvement, either. Sloppy, sloppy, sloppy, and they criticize public school test scores?


LOL maybe what these means is that the "amount" of students, indeed is getting higher, they are getting fat from the poor nutrition no cost meals. Freudian slip of the scale perhaps.


It's amount time someone from the StarAdvertiser proof read their headlines.


I have a related pet peeve. Keep your eyes open for it: less people are using the word "fewer" correctly.

Heck, as an experiment, I just Googled the phrase "less people" and got plenty of results.


Yup, that's high on my list also. Followed by "Loose" used instead of "lose".