The Hawaii Clean Energy Initiative (HCEI) involved many issues but was centered around two key principles: decoupling and Big Wind.

Decoupling is a complex concept. Many people in government and industry readily admit they do not understand it. Decoupling can best be thought of as a code phrase meaning restructuring utility regulation to guarantee the utility a “reasonable” profit regardless of whether the utility is financially bloated or cost efficient, maintains grid reliability or doesn’t, and/or achieves or fails to achieve the goal of ending the use fossil fuel.
Big Wind is a code phrase for a costly, inefficient and reckless approach to getting off fossil fuel that will ultimately fail, leaving us stuck on fossil fuel, unless the people do something about it.
The utility got want it wants from regulators who adopted the decoupling mechanism. Now the utility and Governor Abercrombie are seeking to ram Big Wind down the throats of the citizens. 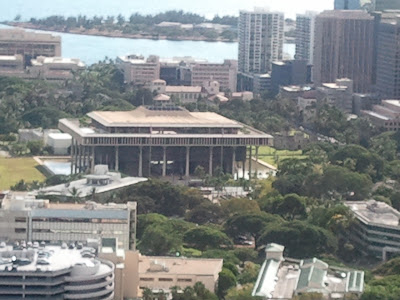 This public-private-partnership of government and Big Business was recently described by Steven G. Horwitz, Chair of the Department of Economics at St. Lawrence University  in New York State.
The current crisis demonstrates more than almost anything in recent memory what I call “Horwitz's First Law of Political Economy”:  namely that "no one hates capitalism more than capitalists."  Aside from the fact ...that the crisis itself was largely brought on by easy money policies and government interventions supported by and benefiting capitalists even as they were undermining capitalism as a system and the well-being of the citizenry, the debate over the bailouts also illustrates the principle quite well. ...
Capitalists have long despised the uncertainty and unpredictability of a truly free market and have frequently succeeded at using the state to reduce that uncertainty ...Of course this has benefited them, but it has harmed the economy and the citizenry in the process.
One of the things market capitalism does best is enable us to peer through the fog of uncertainty that surrounds human action.   Prices provide signals for capitalists to interpret to try to provide the goods and services people will want in the future.  Profits tell them they've done well at it, losses tell them they haven't.  The competitive process is how we learn what it is people want and how best to produce it - and who is best at doing so.  Competition is, in Hayek's words, a "discovery procedure."
Competition sucks if you're one of the competitors.  It makes you have to constantly be on your toes, watching for new entrants, new innovations, and changes in the relevant variables.
How much easier life would be in a more stable and predictable world where capitalists didn't have to serve the fickle consumer!  If we cut short this discovery process, and especially the mechanism of profit and loss, the benefits to the capitalists will not come from behaving in ways that benefit the rest of us. ...
The desire for stability and predictability has been the calling card of dirigisme regimes [a government which exert strong directive influence on the economy] since the dawn of capitalism, whether they called themselves "socialist", "fascist", or just plain "interventionist."
It is but a thinly disguised power grab by those who own the means of production, and who will profit at our expense, rather than profiting by serving us better.  "Stability" is a siren song that we must do our best to ignore, lest we enable them to make an even bigger mess than they already have.
James Sinclair's Venn Diagram 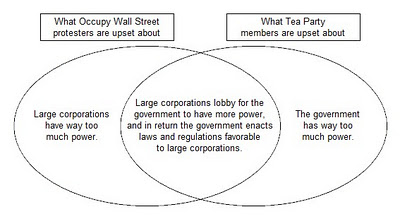 That diagram looks weird since the large corporations are the ones who are funding the Tea Party.