Do families really want all the people Abercrombie is sending home to them?

If someone wasn’t wondering before what exactly is going on at the governor’s office, today’s front-page headline might raise concern:

And yes, among the reasons cited is a desire to spend more time with the family.

How is it that suddenly the resignations are piling up in the Governor’s inbox? Curious minds want to know. Are the rats leaving the ship? Is the captain making even his longest-serving crew walk the plank? Is something rotten in Denmark? Are Hawaii’s families suddenly getting lonely?

I thought of asking the Disappeared News attorney to request copies of the Governor’s emails in order to learn more. Of course, I’d be looking for those “Dear Amy” emails in particular.

There’s precedent for getting governor’s emails. See Ian Lind’s Inside the Governor's Mailbox (Honolulu Weekly, 3/26/2008) or Google for Ian’s other writing on the thousands of emails he received from Governor Lingle.

But Governor Abercrombie is not likely to fork over staff emails just because Disappeared News asks for them. Remember, he still hasn’t released that judicial selection list, something that Lingle had no problem doing. And the Disappeared News lawyer is an expensive guy.

So I did a little digging around and found this crumpled up sheet of paper. Smoothed out, redacted and scanned for you, for whatever it’s worth, here it is. Click for larger. 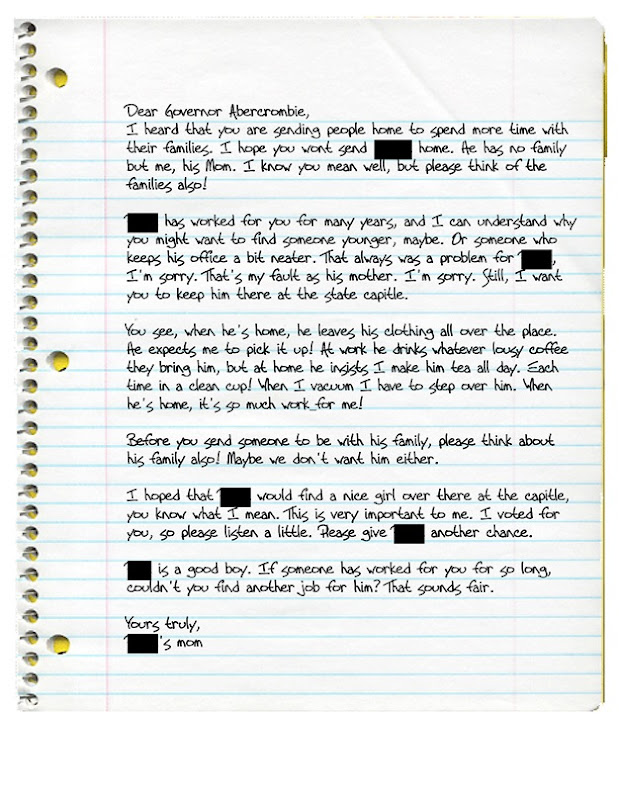 I was wondering if the resignations were piling up so that there would be someone else there to cover things for APEC? If people were not the level of competency/skill/knowledge that is needed for an international event on the island.....well......that may only explain the timing.....and the grouping....


I think we can maybe be assured that anything this donkey does now including matters related to APEC can be undone once heʻs recalled.