Why show this to APEC visitors? 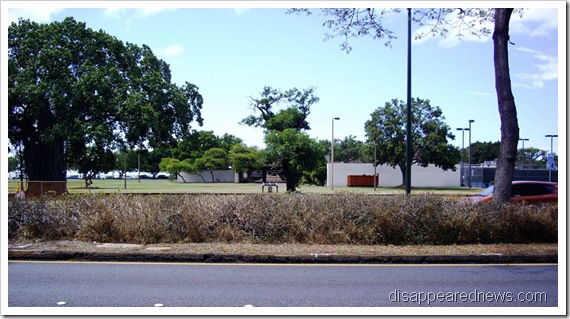 This is a snap of the hedges along the median from Ward Center to Ala Moana Shopping Center.

They are neatly trimmed—and very dead.

It’s sad if the city can’t get the “beautification” of Ala Moana Blvd. done in time for APEC in November,

[The Republic, Some beautification projects won't be ready for when APEC comes to Hawaii in November, 9/13/2011]

but it’s sadder still if visitors (APEC or others) have to see that we can’t even keep some hedges alive.

I spoke with a resident of a nearby condo who said that they and their neighbors had complained about this to no avail.

[I also find it disappointing that APEC visitors googling for information on Honolulu will be getting it from a newspaper in Indiana because Honolulu doesn’t have a daily paper on the web.] [Someone should thank the Indiana newspaper for carrying news of Hawaii for us.]

It’s just September. Couldn’t the city replace those hedges, water them a bit every day from a truck, or rent some plants somewhere?? By November even a banana republic could have the place looking spiffy.

Leave the hedges, they examplify the truth of the city and states leadership..shoddy!


Ask any landscape contractor about working for the State government. Look at the airport and the nearby huge tropical landscape project under the viaduct, ruined. Look at State parks. Look at the State capitol building's grounds! Standard practice at the State has for years been to throw money at multi-million $$ landscape installations (it's borrowed anyway, what the heck) then ignore quality control and slash costs for maintenance and let it gradually go to ruin. Standard practice for maintenance contracts has been to RFP to high standards, then inspect to NO standard: result, a huge bid price spread, then ultra low bidders get the maintenance work, relying on indifferent or non-existent inspection to let it slide. Or turn State Parks over to a workforce where the 'inmates are running the asylum,' often with resident caretakers and zero oversight or accountability. Five years later, you need all new planting to fix up the park! Look at Kakaako State Park.

Everyone touts the 'green' industries but the actual green industry, especially at State of Hawaii projects, where the rubber hits the road and the gardening actually gets paid for and done, gets short shrift in training, education, contracts, maintenance budgets, quality standards, and executive oversight.

The Nimitz corridor, a State highway, has been re-landscaped several times.

Steel and concrete, heavy construction generally, are what count in this City and State, funds the political campaigns, and keeps the labor cartels fat from compulsory dues income. Build with borrowed money, then neglect to maintain it out of the squeezed operating budgets. Someone else will pay back the loans, politicians will continue to get electoral contributions and the game goes on.

Hawaii is now among the worst 5 States in the nation for unfunded pension and medical liabilities. Those dead hedges are a symptom of the whole rotten system-problem: "I'll gladly pay you Tuesday for a hamburger, today." If you want a green Hawaii, the system has to change. The true green industry, the men and women who maintain those hedges, can do it, but the customer has to stop looking the other way and hoping to get something for nothing.

Larry are you sure that isn't a variety of hedge that just looks dead and is in fact thriving as we speak? :O


I just rode the steel on steel elevated rail in Vancouver, Canada. No bathrooms at the stations. The young people I spoke with informed me that the ticket system is on the "honor system." They were right, you don't have to buy a tix and no one is checking. Hope this rail never happens but if it does I would hope they put in restrooms and enforce buying tix. There are thousands of criminals on this island who have no honor.