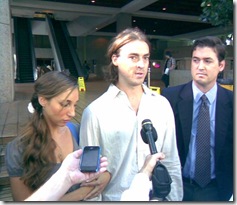 Tess and Jamie Meier face the press after their court appearance Monday morning. To the right is attorney Matthew Winter, from Davis Levin Livingston

Today Jamie and Tess Meier appeared in state court for their arraignment on charges that they violated Revised Ordinances of Honolulu (“ROH”) § 10-1.3(a)(5): “failing to obtain a parks department permit for “meetings or gatherings or other similar activity held by organizations, associations or groups.” The Meiers were protesting on National Go Topless Day, August 21. The police did not interfere when they protested in  Haleiwa but did interfere when they moved to Waikiki (see also earlier article).

The city prosecutor did not proceed, but instead asked the court for a one-month continuance.

The joke going around outside the courthouse afterwards was that this will give the Honolulu Police Department more time to study the First Amendment.

ACLU attorney Laurie Temple helped field questions about the right to protest, and remarked that the Honolulu statute would seem to make it illegal for any two people to say anything to others in a park (my paraphrase).

I asked if the HPD had done this before—that is, arrested people lawfully protesting. Temple replied that it had happened twice before, and mentioned the arrest of homeless advocates at Honolulu Hale. See also: Disgraceful arrests of advocates for homeless by Honolulu police (3/28/2006) and 4 arrested as homeless protest at Honolulu Hale (Star-Bulletin, 3/28/2006).

Is the Honolulu Police Department equating a peaceful protest by two people in Waikiki with all the crime going on there? How about we respect the First Amendment as well as use common sense when making arrest.