Wake up Hawaii, APEC delegates already know whether this is a good place to do business

The idea that APEC 2011 delegates will come to Hawaii and learn that this is a great place to do business is very naïve in 2011. They already know all about Hawaii, and will continue to learn, if they wish, before they come here in November. Of course, any convention can be good exposure for individual companies willing to put together a table display. If they succeed, heh, heh, they might get bought up by an Asian company like Hoku Scientific did.

When the delegates are here, they’ll learn what a great place Hawaii is for holding meetings. They’ll enjoy their stay as countless others have. Our economic success is based entirely on the attractiveness of Hawaii to visitors. That won’t change, near-term at least. 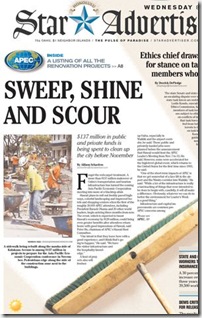 You see, dear technically-challenged Hawaii, APEC delegates and their staffs have smartphones too. They have iPads, laptops and desktop computers, many more advanced than we usually use here. They Google, they do research, they know business and finance.

They may have read today’s Star-Advertiser article about how we are cleaning up the place for them, and the nebulous return we expect for our efforts. They might have a chuckle, if they’ve been here before, about our plan to beautify Nimitz Highway for them:

"One of the short-term impacts of APEC is that we get somewhat of a face lift in the airport and the Nimitz corridor into Waikiki," [Peter] Ho [chairman of APEC's Hawaii Host Committee]said.

[They may laugh again as they Google for the front-page article, available here, even though the paper’s shiny new paywall would like us to think we have to pay to see it.]

Worse, they may read David Shapiro’s column today and learn that we don’t know how to do business at all:

And now we learn that the city didn't do basic due diligence before selecting the Italian firm Ansaldo for a $1.45 billion contract to design, build, operate and maintain rail cars.

Or they may see the article at the upper right of the front page and learn that Hawaii’s state legislature is resistant to ethics. Further research may tell them that the lawmakers never even hear ethics bills introduced for their consideration. They may get another laugh if they read, in that same article, that Senator Baker is still working on a Hawaii stock exchange.

David Shapiro dropped the magic words “due diligence” in his article. That process only begins with Google. Anyone interested in doing business in Hawaii has all the tools at their disposal to learn whatever they need to know about Hawaii. They don’t need to come here in a huge flock to do that. In fact, they have not been coming here to do that very much at all. Hawaii has a long trail of “high-tech” businesses which have tried to live in the land of sun and surf but have left. Sooner or later, the bean counters come knocking on the CEO’s door (if she/he is not out surfing) and point out that the bottom line is profit, and that profit requires being close to customers or vendors or being part of a developer community, or whatever. Hawaii is attractive at first, but those bean counters eventually prevail.

Another way for a Hawaii company to succeed, and why venture-capital firms don’t create many jobs here, is that if a company is successful it might get bought out and then leave. Darling Hoku Scientific created jobs not in Hawaii but mainly in Idaho, and got bought up by a Chinese company. It’s no longer a Hawaii company despite our dreams, wishes and delusions.

Yes, APEC delegates and their staff know how to do research. In Googling for fine restaurants in Honolulu they’ve no doubt also learned of our plan to pretty ourselves up for their arrival. They know about our schools, and they know that should they come here they will pay outrageous water bills. They know that our farm labor has been based, in part, on human trafficking.

They know we’d like to hide away our homeless somewhere, and even that a Japanese tourist in a wheelchair was upended near construction in Waikiki. There are no secrets from the all-knowing Internet.

Sure, we need to show them a good time. I would just hate to find out that the state or city lost money doing it, while cutting public worker salaries.

Wasn't all these ridiculous actions lead by the Lt. Gov.? Thanks, Larry, an excellent article.


Yes, and not only a good place to do business pretty soon it will be owned by foreign nationals and free trade corporations...the resources are history unless Abercrombieʻs recent theft is repealed.

This is a very good piece on how Abercrombieʻs recent passing of Act 55 are timed with APEC delegation here: Privatizing Hawaii's Public Lands
http://islandbreath.blogspot.com/2011/08/privatizing-hawaiis-public-lands.html