The Tea Party looks back at the good times


“An extremely important part of my proposal is that it would eliminate the need to raise taxes to support the poor, thereby enabling the rich to continue to enjoy all their luxuries. In addition, English landlords would not have to show mercy to their Irish tenants. In turn, the Irish tenants would have enough money to pay their high rents, thanks to the sale of their children.”—A Modest Proposal, by Jonathan Swift (1667-1745)

By 2014, Social Security had been abolished, Medicare and Medicaid privatized, the unemployment rate reached its peak of 37% (the real rate was closer to 66% among whites, and 80% among blacks not yet incarcerated).

By 2016, recurring riots in the streets of New York, Chicago and Los Angeles had been successfully quelled by Palin’s Northern Command. Prisons were completed or schools repurposed in Northern states for the incarcerated multitude, and acres of razor-wire enclosed concentration camps that covered former farmland in drought-ravaged Oklahoma.

The price of gold plummeted in 2015 so that the poor could not sell their belongings at a profit. Without jobs or homes, there was little to sell but the gold rings, chains and shiny baubles acquired in more civilized times, so the “free” market was artificially controlled and essentially eliminated. This also served to reduce robberies and looting, since nothing of value could be sold for food.

People fought to get into the prisons or camps at first, but when torture was applied as a rite of entry, the demand fell off. Once again, people spoke of the Abyss. 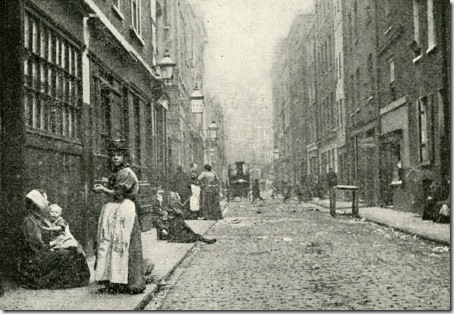 “It will be readily apparent to the reader that I saw much that was bad.

Yet it must not be forgotten that the time of which I write was considered "good times" in England. The starvation and lack of shelter I encountered constituted a chronic condition of misery which is never wiped out, even in the periods of greatest prosperity.
Following the summer in question came a hard winter. Great numbers of the unemployed formed into processions, as many as a dozen at a time, and daily marched through the streets of London crying for bread. Mr. Justin McCarthy, writing in the month of January 1903, to the New York Independent, briefly epitomises the situation as follows:-

"The workhouses have no space left in which to pack the starving crowds who are craving every day and night at their doors for food and shelter. All the charitable institutions have exhausted their means in trying to raise supplies of food for the famishing residents of the garrets and cellars of London lanes and alleys. The quarters of the Salvation Army in various parts of London are nightly besieged by hosts of the unemployed and the hungry for whom neither shelter nor the means of sustenance can be provided."—The People of the Abyss, by Jack London (1876-1916)

When London wrote his book, the phrase "the Abyss" was in wide use to refer to the lowest strata of society (Wikipedia).

As we look back on the early Tea Party years, the parallels with Jack London’s description come alive again. In this passage, read :”Detroit” for London, and you are there.

Nowhere in the streets of London may one escape the sight of abject poverty, while five minutes' walk from almost any point will bring one to a slum; but the region my hansom was now penetrating was one unending slum. The streets were filled with a new and different race of people, short of stature, and of wretched or beer-sodden appearance. We rolled along through miles of bricks and squalor, and from each cross street and alley flashed long vistas of bricks and misery. Here and there lurched a drunken man or woman, and the air was obscene with sounds of jangling and squabbling. At a market, tottery old men and women were searching in the garbage thrown in the mud for rotten potatoes, beans, and vegetables, while little children clustered like flies around a festering mass of fruit, thrusting their arms to the shoulders into the liquid corruption, and drawing forth morsels but partially decayed, which they devoured on the spot.

There were no jobs to be had as the Tea Party slashed the already shrunken footprint of government. Corporations and rich individuals were able to tap the endless pool of the incarcerated for their hotel or factory labor and for personal servants. The slums were now the “middle class” and were distinguished by the ability of many slum-dwellers to keep slaves.

Each house in this street, as in all the streets, is shoulder to shoulder with its neighbours. To each house there is but one entrance, the front door; and each house is about eighteen feet wide, with a bit of a brick- walled yard behind, where, when it is not raining, one may look at a slate-coloured sky. But it must be understood that this is East End opulence we are now considering. Some of the people in this street are even so well-to-do as to keep a "slavey." Johnny Upright keeps one, as I well know, she being my first acquaintance in this particular portion of the world.

Johnny Upright could have been a Tea Party peon. While reduced in circumstances to near-poverty, they nevertheless hold that the elimination of government and the ascent of the rich were precursors of the New World Order they expected to beneficently descend, or perhaps trickle down, from the parched dust clouds any time now. Belief was all that mattered, belief was all Tea Partiers knew.

A committee of the London County school board makes this declaration: "At times, WHEN THERE IS NO SPECIAL DISTRESS, 55,000 children in a state of hunger, which makes it useless to attempt to teach them, are in the schools of London alone." The italics are mine. "When there is no special distress" means good times in England; for the people of England have come to look upon starvation and suffering, which they call "distress," as part of the social order.

Here we part with Jack London., for in 2016 the Tea Party ended public education altogether.

My quota of data for today is at an end.

As is now the custom, I end with the mandatory “I pledge allegiance to the Tea Party, and to Sarah Palin for which it stands…” you know the rest.

The ironic thing is Tea Party members share many of the same beliefs as progressives. Fair Trade as opposed to Free Trade. Bringing back offshored jobs to America, a fair tax system and good public education. Tea Party members being the low information voters they are have been lead to believe they the way to these goals is supply side economics. In the short term there is no way to combat their mindless beliefs. In the long term breaking up the monopolistic corporate news media as well as a new fairness doctrine is the only was to defeat the corporate financed Tea Party.