Police neglect to enforce laws contributes to death by speeding

“The dust hadn't even settled from the crash when John Kahele made his way to the street.

‘To see the body that way was just horrific,’ he said.

For Kahele, the accident highlights the speeding problem in the area. 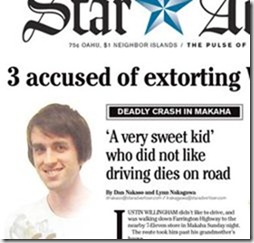 Speeding on Farrington Highway is nothing new. Here is one more life claimed by a speeding driver. This one was allegedly drunk and may have been on drugs, but most speeders are just sober lawbreakers.

They can get away with it, day after day after day, because Honolulu police place little or no emphasis on enforcing traffic laws. It’s the same for stopping before turning right on red, using turn signals, and so forth. Motorists don’t bother following the law because the chances of being caught are close to zero.

We should not accept this.

When pedestrians are killed in poorly defended crosswalks across major roads, the neighborhood has to plead for installation of traffic signals. There’s often a debate on exactly how many people have to be killed before the city will install one. The lack of traffic law enforcement is part of the same fabric.

But it’s deeper than that. It’s reasonable to question just how effective Honolulu policing is.

I recall attending a community meeting at Roosevelt High School many years ago. Two reports were made at the meeting. One was by the principal, who said that each Sunday the lock to the gate at the school pool was broken, and students used the pool. On Monday they repaired the lock, but the new one was broken the next Sunday.  I thought that it was amazing that this could just continue without someone staking out the place on Sunday and putting a stop to it. In addition to anything else, not taking action could make the state liable for any accidents, since they obviously condoned the use of the pool on Sunday.

It was the second point, which involved the police, that really made me wonder. Motorists stopping at night at the scenic lookout points on Tantalus were being attacked and robbed in their cars. I think there were some killings. The attacks were repeated occurrences, and it was theorized that it might be the same perpetrators each time.  Since police were present, I stood up and asked why they didn’t hide a cop in a tree somewhere and drop down and grab these guys next time, since the attacks were so frequent. In other words, do their jobs.

The response was that they had only so many cars to patrol the area (I think it was three), and so they couldn’t do that.

What are police for? Going back to the Farrington speeding, they could put an end to it very quickly, I think. Nab some speeders. Come back and do it again every so often.

Do we live in a banana republic or what? Stop—you don’t have to answer that.

Such a great article which pedestrians are killed in poorly defended crosswalks across major roads, the neighborhood has to plead for installation of traffic signals.In deed lack of traffic law enforcement is part of the same fabric. Thanks a lot for posting this article