Imagine an undersea craft powered by the ocean. This science fiction idea has been tested and it works!
A successfully demonstration of the world’s first robotic underwater vehicle to be powered entirely by ocean thermal energy occurred off Hawai`i in 2009-10.

The 183-pound unmanned prototype submarine completed 300 dives down to a depth of over 1600 feet in water about 100 miles southwest of Honolulu. 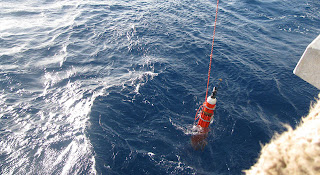 Micro OTEC does this in different time intervals. A small unmanned underwater vehicle (UUV) makes deep water dives and then rises back to the surface.

On the outside of the sub are 10 external tubes which contain waxy substances known as phase-change materials. In the cold deep ocean the material contracts. In the warm surface water the material expands which puts pressure on oil stored inside the sub. The oil periodically drives a hydraulic motor that generates electricity and recharges the vehicle's batteries.

OTEC is really gaining momentum as a clean, 24/7, power source. Over at the On Project, they're out in front of the movement. Check them out at http://tiny.cc/4v4pr Ocean Thermal Energy Conversion in on the verge of really changing how millions get power.