Glenn Greenwald: Obama’s not weak, he got what he wanted 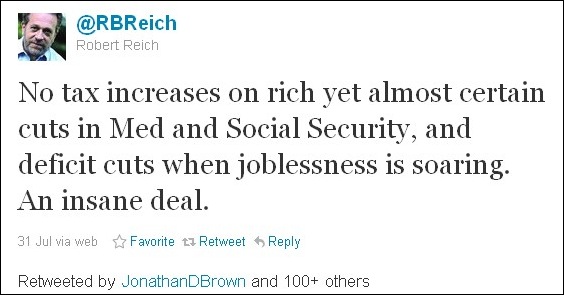 I’ve held the theory that Obama lacks a spine, that he caved in to Republicans too easily. Anonymous, in a comment on that post, pointed to a Saloncom article by Glenn Greenwald. I fear Anonymous is right, and I need to re-think what I wrote.

It appears to be true that the President wanted tax revenues to be part of this deal. But it is absolutely false that he did not want these brutal budget cuts and was simply forced -- either by his own strategic "blunders" or the "weakness" of his office -- into accepting them. The evidence is overwhelming that Obama has long wanted exactly what he got: these severe domestic budget cuts and even ones well beyond these, including Social Security and Medicare, which he is likely to get with the Super-Committee created by this bill (as Robert Reich described the bill: "No tax increases on rich yet almost certain cuts in Med[icare] and Social Security . . . . Ds can no longer campaign on R's desire to Medicare and Soc Security, now that O has agreed it").

Check out the article.

The deal has set up a true “Cat food commission” that will cost seniors big time. And what to do? Vote for Obama in 2012? Vote for a Republican?  What choice is that?

More from the Department of Now It All Makes Sense: Chapter 1 - How Obama Sold Us Out
http://www.correntewire.com

I don't believe it has anything to do with having a spine or being a secret conservative. President Obama is a politician "first" and makes decisions based on getting re-elected. He is playing a dangerous game of no matter how bad I am, the other guy is worse. Obama's crime is being a President without a philosophy, and in a time of great economic difficulty the penalty is a one term presidency.


I believe the budget deal is both bad economics and bad politics. It is bad economics because it will prolong and deepen our lingering recession if we cut government spending and services at a time when we actually need to expand them, for SOUND ECONOMIC reasons. Restoring taxes to the wealthy to the Clinton Era level and eliminating the cap on incomes subject to the FICA tax would do great wonders to help balance the budget and eliminate FUTURE deficits in the Social Security fund.

It is bad politics because his consistent surrendering just encourages the "hostage-takers" to continue to demand further concessions in future confrontations. He appears weak, to his opponents, to the congressional Democrats, to the general public and to the world. No one respects a person who refuses to stand up for himself and his allies. Not the opponents and certainly not the voters.

The congenital "centrism" which appears to be guiding his administration and campaign is based upon FOOLISH assumptions of how the voters will respond if he continues to abandon traditional Democratic commitments in an effort to accommodate the demands of Tea Party zealots. He cannot ignore the wishes of his Democratic "base," as that will only increase the "enthusiasm gap" witnessed in the 2010 midterm elections. Fewer Democrats (and independents) will feel motivated to vote for him. And even if we resign ourselves that he is "better than the alternative," such an attitude will not result in campaign contributions from small donors, nor in the outpouring of enthusiastic volunteer hours spend on electing him in 2008. The dangers of an "enthusiasm gap" are very real.

Obama's team may be relying upon widespread fear of the radical right to "incentivize" support and turnout for him. But that is a bankrupt and cynical strategy. What happened to the "Audacity of Hope"? Are they really unaware how many of his former supporters are feeling like we are suckers to have ever believed in his potential to be a GREAT president?

If someone could lay out a plausible plan for a primary challenger to Obama, I would climb onboard in a second. But, so far at least, I can't see a realistic path for such a challenge.

OK, I just read more of Glenn Greenwald's commentary. Near the end, he quotes a Democratic Pollster:

Mark Mellman, a Democratic pollster, said polling data showed that at this point in his term, Mr. Obama, compared with past Democratic presidents, was doing as well or better with Democratic voters. "Whatever qualms or questions they may have about this policy or that policy, at the end of the day the one thing they're absolutely certain of -- they're going to hate these Republican candidates," Mr. Mellman said. "So I'm not honestly all that worried about a solid or enthusiastic base.”

So maybe the Obama group has a well-developed rationale for disagreeing with my notion that his stance is "bad politics." I disagree with their cynical conclusion, but what do I know?
--Former Obama Supporter


"So maybe the Obama group has a well-developed rationale for disagreeing with my notion that his stance is "bad politics." I disagree with their cynical conclusion, but what do I know?"

Obama's team is forgetting Clinton's mantra, it's the economy stupid. The passage of this bill almost guarantees a double dip recession during next years presidential election. Most people would have recognize this bill has political suicide written all over it. Not this President.