I was impressed. While our local paper’s coverage of DC is all second-hand, often Right-of-center aggregated news or opinion, not only does Civil Beat have an experienced and talented journalist on the spot, but she has just appeared in a KITV news segment (8/1/2011).

Here’s a snip of the KITV video page. On the right—that’s not a KITV reporter but Adrienne LaFrance. The clip began with her Skype interview with Sen. Dan Inouye.

Just getting Sen. Inouye onto Skype is praiseworthy. 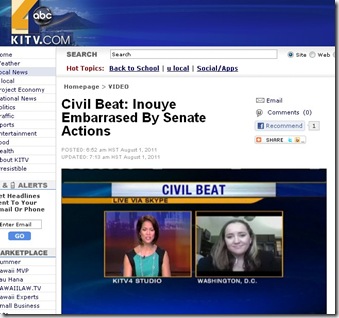 Adrienne La France is the only Hawaii reporter stationed in DC. Most likely we will see more of her if Civil Beat cooperates with other news organizations. Here’s a clip from later in the KITV segment. Good promo for CB. The Civil Beat website is greatly improved and even features breaking news. You can also get a daily email each morning with good local coverage.

Unlike the Star-Advertiser, they are not a news aggregator. In your S-A you’ll find articles gathered from the Los Angeles Times, Washington Post and the New York Times. In truth, it’s better than the slim column of national news on page A3 of the old Advertiser. So CB is not a replacement for a daily paper. Nor do they have a comics page, so I’m not ready to give up my newsprint addiction.

It would not be too hard to aggregate national or international news on the web, and perhaps even to run comics, as some newspaper websites do. That’s probably not what CB is planning, but who knows what they plan. I am happy to be surprised, as I was this morning.

This is all good for Hawaii. Information is the basis of a sound democracy.

But doesn’t CB have to make money one day? How will they do it? Perhaps their old paywall is simply wrapped up and stored at the back of some closet in their Kaimuki offices, ready to be re-assembled should their readership reach a certain point.

There are alternative business models. Other local and national websites have managed to survive without a paywall.  Of course, one model is philanthropy (Pierre Omidyar could probably support CB forever, but likely that’s not his plan).

Civil Beat is making breakthroughs (including the first known reporting laptop in Hawaii’s federal district court, at least dragging the judges into the 20th if not the 21st century).

CB is on the ascent and they’re growing without a formulaic political bias, the stain that comes with every issue of our morning paper.

All good for us and for the future of journalism in Hawaii.