Firm gets OK to laysea pipe off Kakaako for cooling (Honolulu Star-Advertiser , July 21, 2011) 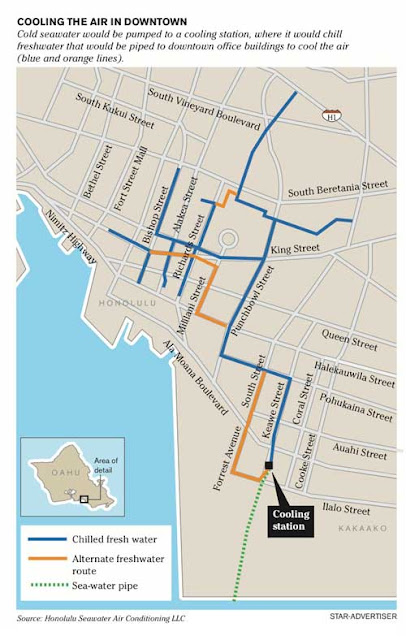 
Rather than importing electricity into large buildings to power chillers to cool the building, a system involving three sets of pipes are used in sea water air conditioning systems (SWAC), with heat transfer units located where the pipes meet. These pipes consist of the building’s internal pipes, an inter-building loop, and an ocean loop. In essence, cold salt water is brought up from the ocean’s depths, meets the inter-building pipe loop and pulls heat from it, and then returns the ocean water to a warmer section of the ocean. The cold water in the inter-building loop travels from building to building, where it absorbs heat from each building’s internal loop. 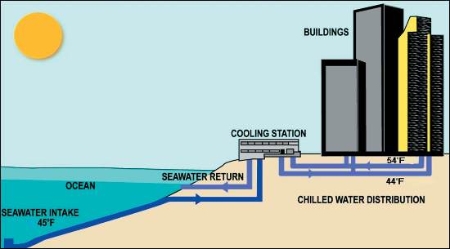 Cornell University built a six-mile intake pipe from a cold Finger Lank in upstate New York. The total heat added to the lake, over the course of a year, is equivalent to the heat that the lake absorbs from one hour of summer sunshine. Cornell did a thorough multi-year environmental analysis of the impacts and found them to be minimal. Makai Ocean Engineering, a Hawaii company, built the Cornell SWAC system as well as one in Toronto.

But what if Oahu gets hit by an earthquake and then a Tsunami. Won't that lead to an uncontrollable water leak on land? Our ocean would get contaminated with salt water for who knows how long. Clean up could take hours or even a day. What about the safety of our children. One spray of salt water could mean a lifelong battle with illness. Sorry, I'm so disgusted with what the Nuclear Power industry has done in Japan I couldn't help myself.


Great post Old Diver!
Where are the kickbacks? The cost increases for that seawater?
How can a respectable monopoly ever expect to survive on sustainability?

What the heck kind of idea is this?

The nuclear industry is the same throughout the world. We are children playing in gods land of energy and matter, and it is too much for us. it will spank us badly, it will change us. Truly we can make hell on earth.