China's military is developing electromagnetic pulse weapons that Beijing plans to use against U.S. aircraft carriers in any future conflict over Taiwan, according to an intelligence report made public on Thursday.
…
EMP weapons mimic the gamma-ray pulse caused by a nuclear blast that knocks out all electronics, including computers and automobiles, over wide areas. The phenomenon was discovered in 1962 after an aboveground nuclear test in the Pacific disabled electronics in Hawaii.

NPR (National Public Radio) actually posted a video in their story on this a year ago: A Very Scary Light Show: Exploding H-Bombs In Space (NPR, July 10, 2010). Here are two snips from the short video. 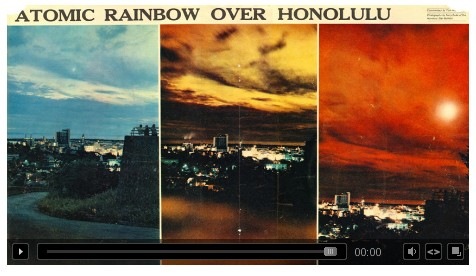 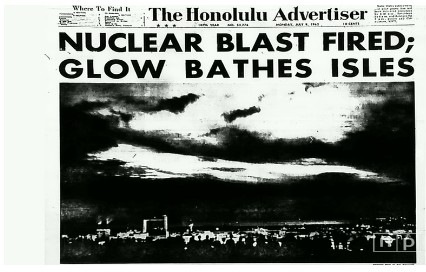 Of course, the effects of the Pacific nuclear testing on Hawaii were minimal. To fast-forward to the present, Hawaii, under governors Lingle and Abercrombie, is seeking to cut off medical care to former residents of the Pacific Islands who live in the state because of US nuclear bombing of their homeland. Abercrombie has not withdrawn the state’s appeal to the 9th Circuit of a district court ruling against these cuts. An informational briefing on the case at the Legislature will be held on August 22, 10-12 a.m., location to be announced.