Maybe a spine can be installed. I never thought I’d see this.

From MoveOn’s web page this text (snip) and graphic:

News just broke that President Obama is offering to cut Social Security as part of the debt deal they’re working out in Washington right now. And reports say he’s stopped pushing to eliminate the Bush tax cuts for millionaires in these negotiations.

If both these things are true, it’s an absolute outrage. When asked, 75% of MoveOn members said that if a deal like this were to go through, they’d be less likely to donate to or volunteer for President Obama’s re-election campaign.

If you agree, can you share this graphic on Facebook today, and make the text your status? 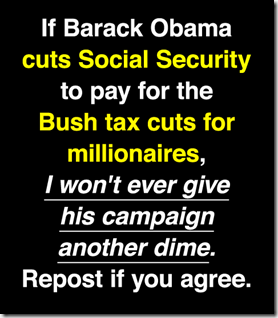 Good for them. But they need to do more. Obama no longer needs our dimes. He gets millions from his banker and Chamber of Commerce buddies.

Besides, only 75% of MoveOn members only committed to maybe being less likely to donate to or volunteer for Obama. I doubt he’s real worried yet.

So as a threat to Obama, this is a tiny one. But it’s a beginning, nevertheless. May they Move On to something a bit more effective.

Move-On was a big force in electing Obama...they have been betrayed just like all voters. This is a positive move!


I would advise Obama to look for a different location for Christmas. THis Kapuna does not feel much aloha. My Social Security pays the rent.