I felt sure that Honolulu would move into the ranks of America’s “Meanest Cities” after Governor Abercrombie and his homeless czar Marc Alexander declared that organizations and individuals should stop feeding the hungry homeless in the parks. But it appears we have strong competition. Actually, we’re not officially on the list this year, but that could change.

A sure contender for the title this year is Orlando, Florida. Orlando has passed and is enforcing a law limiting the sharing of food to twice a year per park. So far, a website reports that Orlando has made about 20 arrests for the crime of giving food to the hungry.

It’s natural that there should be some attention paid to this immoral act by the City of Orlando in Japan. Even before the current crisis caused by the earthquake, tsunami and nuclear disasters, Japan has had compassion for those in need.

Orlando is a popular tourist destination. They don’t need the bad publicity that their hard heartedness is beginning to attract overseas.

The Japanese website, Tokyo Progressive, has started a petition. You can sign too. Show them that we in Hawaii are still a kind and generous people. And tourist-friendly, of course.

The Tokyo Progressive is also a good source of Fukushima information, particularly if you’re bilingual (but that’s not necessary): 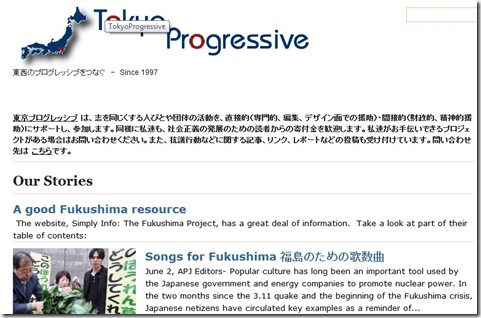 The website Food Not Bombs has started a campaign to resist the Orlando law through civil disobedience—that is, by feeding the homeless in the park. Read about it here. They are encouraging people to go to Orlando and risk arrest by doing the right thing.

Gov. Abercrombie should be careful that he does not hurt our lynch-pin tourism industry by further heartless action against our homeless citizens. Look at it this way: starving them is not going to do them any good. A Gestapo-like sweep just before APEC will not make Hawaii seem like a Mecca of compassion as it hits overseas news headlines. When Lingle stepped in to the mess Mufi Hannemann was making (for example, arresting leading homeless advocates) she did it by doing something positive for those forced to live outdoors—she opened shelters for them. Abercrombie seems not to be on that compassion track. That could be bad news domestically and overseas.

Besides, if those affected march right back into Waikiki during APEC in November, there’s not a thing he can do about it. There’s still no legal way to arrest people for walking on a public sidewalk. If they wish, those he would starve can easily and effectively retaliate.

We residents of Honolulu can do our bit not by travelling to Orlando to get arrested, but by supporting or participating in a feeding program right here, or by supporting any church or agency that provides services to the homeless. Remember also that about a third are children. They need an education, and also school supplies, tissues, even toilet paper, because Hawaii, like a third-world country, makes children bring these things to school. Many families struggle with the expense, and those living in the parks or beaches may not be able to provide these things at all. Want to help? How about dropping off school supplies for homeless kids?

There’s lots we can do. We can help without denying food to hungry people.