It’s really pathetic. Few inspections, almost no fines. Hawaii could be a polluter's paradise, if it remains up to the EPA to protect us. 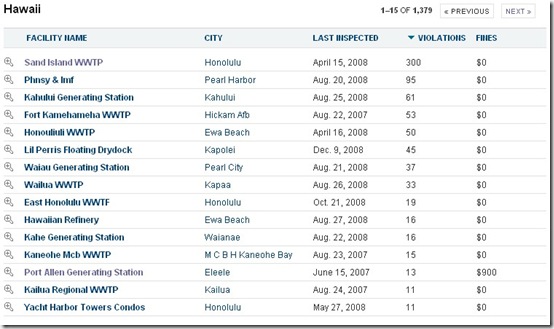 According to this New York Times survey page for Hawaii (corresponding article is here), the Sand Island Waste Water Treatment Plant, for example, had 300 violations in the measurement interval ending in 2008, but zero ($0) fines.

It’s not just municipal facilities that make the list. On the very first page, for example, we find Yacht Harbor Towers Condos with 11 violations and no fines. The Waikiki Aquarium is on page 2.

Inspection dates are often years in the past. The EPA simply hasn’t been doing its job.

The Times article contains several horror stories, including chemicals in West Virginia drinking water that rot teeth, poisons in the water people bathe or shower in, and more. It’s clear that America’s polluters have and still are enjoying a field day, poisoning our natural resources.

“Unless the E.P.A. is pushing state regulators, a culture of transgression and apathy sets in,” said William K. Reilly, who led the E.P.A. under President George H. W. Bush.

Enforcement lapses were particularly bad under the administration of President George W. Bush, employees say. “For the last eight years, my hands have been tied,” said one E.P.A. official who requested anonymity for fear of retribution. “We were told to take our clean water and clean air cases, put them in a box, and lock it shut. Everyone knew polluters were getting away with murder. But these polluters are some of the biggest campaign contributors in town, so no one really cared if they were dumping poisons into streams.”

Are conditions improving under President Obama? Not necessarily. Check out the end of the Times article and you decide. Despite promises,

Water issues have taken a back seat to other environmental concerns, like carbon emissions.

A paradox is that if we expect the EPA protect us and to begin to levy fines, then we’ll get stuck with the bill, since we (for example, City and County of Honolulu) are the polluters.

This is all part of the Ayn Rand libertarian plan to add safe water to the whims of the "free market". Because as we all know, government just gets in the way of clean water.