Reuters determines that a dead bin Laden photo is a fake. Here we go, folks

So what if Osama isn’t dead? This burial at sea thing is sure to raise eyebrows.

It used to be, in ancient and simpler times, that the conqueror brought back a head on a pike or in a box as proof of absolute victory. Now they take DNA and dump the body at sea? Something important has been missed here. Not to suggest that JSOC should carry head caskets on their missions, just that suspicions will be aroused, and correctly so.

Here’s a head inspection scene from a kabuki play. The head is in the casket in front of the general. 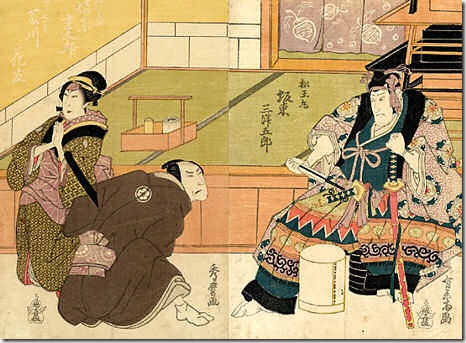 [note: it’s probably necessary to add that in every head inspection scene in kabuki, the presented head is a fake.]

Reuters has just tweeted that a picture circulating in Pakistan of the dead bin Laden is a fake (careful about clicking on the link or the tweet, the picture is quite graphic).

I don’t join with any conspiracy theory that bin Laden wasn’t actually killed, only that it was done in such a way that it could fuel these conspiracies.

What will we say if a YouTube video of Osama appears on the web, posted from some cave somewhere, or from an Internet café in Paris, alleging that “Rumors of my death have been greatly exaggerated?”

The photo Reuters obtained was from a Pakistani TV station, not from the US military. But now that the news of Osama’s death has peaked, it’s time for the peripheral stuff to be aired. There’s even breaking news that a tape from bin Laden (made before his death, of course) will actually air shortly.  That should be interesting.

You probably didn't see it, but I raised this issue on Shapiro's blog yesterday. Since then, I have found even better proof of the fraud. The pictures are gruesome, but this website ha both parts of the Photoshopped composite picture. The top portion of the face is from another dead man, a picture which was published two years ago. The newer fake picture consists of bin Laden's face from the nose down being overlain on the earlier picture.

None of this means Osama is not dead. The fake picture did not come from the US governemnt. But now that it is circulating, it feeds the inevitable myth that Osama either was not killed or was taken prisoner. If the USG wants to squelch that myth, they should release the actual pictures ASAP.

This wasn't especially surprising.....!
During the Cold War,Our side gave"Information",the other"propaganda".
When the The TV-Radio building(that undoubtedly did propagate the Milosevic regimes unsavory opinions) in Belgrade were shelled,it was painted as a glorious triumph of precision bombing by heros.When the Jihadiacs(my expression about fanatics that fantasize about reverting to an Era,which is totally unrealistic in todays World)hit the goals on 9-11 that either directly or indirectly worked for the military-industrial complex & diff.security organisation,we got a totally other story.So CAN we believe Bin Laden IS dead.....? HOPE,we may and should,but WHY could the US not have shown same airbrushed photos as when Che Guevara were shot? It could have been done quickly and dignified to the corpse,and the World would not engage in speculation that this is just ANOTHER lie from"Our Masters Voice"....