Will radiation in Hawaii’s milk kill some of the bacteria in transit?

The ongoing nuclear emergency in Japan has resulted in the release of radioactive substances into the air and water. Depending on how countermeasures go, this release could be an ongoing hazard that will affect humanity for generations. The question is not whether the substances will cause cancer, but how much, and how many deaths will result. 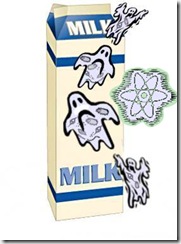 I was going to post this yesterday, but it sounds too much like an April Fools joke. Will the bacteria in the milk shipped to Hawaii b harmed by radioactive iodine fallout now detected on the Mainland?

Hawaii’s milk comes almost exclusively from the Mainland and is re-pasteurized on arrival to make it drinkable. Why? because it is shipped unrefrigerated. (See articles here, dating back to 2005, on this issue.) Now we are faced with the possibility that our milk will be contaminated by radioactive iodine. But the FDA tells us not to worry.

Heck, we’re pretty complacent. We’ve been drinking this repasteurized milk without complaint so far. What’s a little iodine-131 going to do to us?

The problem we face, and that mothers face when deciding if milk is safe for their sensitive children, is that our government can’t be trusted to give us the straight dope on the risk.

When the FDA, as well as the Star-Advertiser and other news sources, tell us that our milk is safe, they refer to radiation exposure from outside sources such as airplane trips or x-rays.  This is totally wrong.

It’s one thing to be x-rayed and another thing to eat contaminated food. The difference is clear: when the dentist is done taking your x-ray, you don’t get bombarded with any more radiation. It’s over with. When you drink milk contaminated with radioactive strontium, or you eat lettuce sprinkled with radioactive iodine, that stuff goes right into your body and radiates your organs from inside, over time. The iodine is concentrated in the thyroid, for example. It’s a “gift” that keeps on giving.

The FDA thinks the danger is in holding a container of this milk in one’s hands and getting exposed to the radiation. In actuality, the danger, as experts agree, is in drinking the milk and letting the thyroid and other organs absorb the radiation internally over long periods of time.

Thanks to ever vigilant Shannon Rudolph for a pointer to this press release posted yesterday by Friends of the Earth:

A U.S. Food and Drug Administration statement regarding milk contaminated with radiation from Japan failed to accurately inform and educate the public, five watchdog groups and a former senior advisor in the U.S. Department of Energy said today, pointing to the fact that exposure to ingested iodine-131 is substantively different than everyday exposure to radiation in the environment.

On March 30, in response to reports that radioactive iodine-131 has been found in milk in Washington state, FDA senior scientist Patricia Hansen said, “Radiation is all around us in our daily lives, and these findings are a miniscule amount compared to what people experience every day. For example, a person would be exposed to low levels of radiation on a round trip cross country flight, watching television, and even from construction materials.”
…
“No matter how small the dose might be, it is out of context to compare an exposure to a specific radioisotope that is released by a major nuclear accident with radiation exposures in everyday life. The FDA spokesperson should have informed the public that radioiodine provides a unique form of exposure in that it concentrates rapidly in dairy products and in the human thyroid. The dose received, based on official measurements, may be quite small, and pose an equally small risk. However, making a conclusion on the basis of one measurement is fragmentary at best and unscientific at worst. As the accident in Fukushima continues to unfold, the public should be provided with all measurements made of radioactive fallout from the Fukushima reactors to allow for independent analyses.”

[Friends of the Earth, FDA’s Comparison of Radiation in Milk to Everyday Exposures Called ‘Improper’, 4/1/2011]

Unfortunately, we can’t count on our government to tell us the truth, much less protect us against radiation resulting from nuclear accidents getting into our food supply and thus into our bodies. The FDA badly needs an overhaul, which our present corporate-run government is not likely to undertake.

Corporations may be persons according to the Supreme Court, but apparently they don’t eat food. The rest of us do. We in Hawaii, as much as flesh-and-blood people anywhere, are concerned about the safety of our food supply.

Our state government, fearful perhaps of tourist reaction, may not give us the information we need either. As with the ongoing depleted uranium issue, we’ll need to check with independent sources for guidance on threats to our health and safety.

Funny that our legislature still talks about increasing the excise tax. Instead, they should give us a refund, because we’re not getting our money’s worth, whether it’s control of disease-carrying mosquitoes or honest reports on threats to our food supply.

This quote always cracked me up, especially the last sentence. (regarding nuclear testing fallout lawsuits)
"Reported in "The Enemy Within" (1996) by Jay Gould, page 194: "The Nevada down winders' suits were unsuccessful. Despite winning their case in the lower courts, the Appellate Court ruled in favor of the AEC on the grounds that the US government could not be held responsible. At one point, one of the lawyers for the plaintiffs sent a series of interrogatories to the AEC defense counsel with the following simple question: Who has the responsibility for the safety and welfare of persons and their property near areas of possible fallout? "The AEC answered as follows: " 'It is the responsibility of the heads of families and owners of property to protect their families and their property from possible radioactive fallout."

The clear solution to the radioactive iodine problem is a future Supreme Court ruling that people are corporations. That way people will live forever, can merge with endless partners and pay no taxes.


Decided, not buying any milk for 3 weeks.


Yes, we buy the milk at Kokua Market here in Honolulu where it has been on sale for a reasonable price. It's also at Foodland and Whole Foods (more expensive). The milk is pasteurized by Meadow Gold in Hilo using a low-temperature pasteurization process and is absolutely delicious.

If fallout settles on the Big Island, that dairy could be in trouble. The detectors on the roof of the Department of Health in Honolulu are not going to tell us anything about what's in our milk.