A way to more accurately predict the weather on Oahu, but I think it stinks

It’s true that the weather on a tropical island is hard to predict. It can also be rainy at one place and dry at another. Driving from Kahala to Nuuanu is like flying from Phoenix to Portland.

Here’s the forecast from this morning. Now, if it’s going to rain anywhere, it would be Nuuanu or Manoa. Sitting in front of our bright, sunny window this morning it was clear that the newspaper had really wasted its valuable space. It was a bright, sunny postcard-Hawaii morning.

We have our own ways of forecasting the weather. This particular method is infallible. 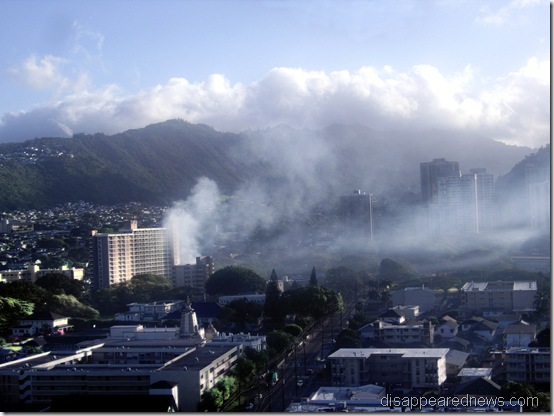 This is a snap of the view outside our window at 7:11 a.m.. It looks back toward the valley along Nuuanu Avenue.

And no, that’s not a house on fire, it’s Huli-Huli or some similar kind of chicken being fired up for some event.

As a weather forecast, it indicates that no, it won’t rain. Not a chance. There is no way they’re going to ignite that much chicken fat only to have it all doused in a downpour.

But look at that smoke! It really stank. I don’t care how much anyone likes chicken, this was bad. It was an oily smoke that couldn’t be escaped. Look at how it blankets the valley. I hope there was no laundry out drying anywhere near that smoke.

After breakfast we went outside to the car. The air stank of chicken fat.

This can’t be legal. This is air pollution. I wonder if there are laws against it.

The scene was even worse, if you can imagine that, a few minutes earlier. By the time I got my camera it had calmed down to the scene pictured above (click for larger). Later, the fatty smoke hung all over the valley as it does toward the right of the photograph.