Most disappeared news today: Israel at war with Gaza

A Tweet just in indicates that the Gaza Strip is being attacked not only from the air but by Israeli gunboats, from the sea. This is no “kinetic military action,” this is another war. Yet you’ll hear little about it. 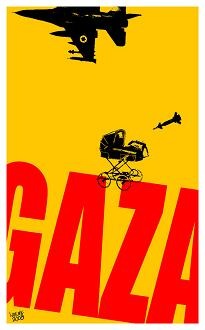 The tiny article in today’s Star-Advertiserr is probably more than many other papers around the country carried, but it was deceptive by its omissions.

There’s a war in progress between Israel and occupied Palestine. US media are, of course, notably silent on the fighting and there is no call for a “no fly zone” to prevent civilian deaths, which are mounting.

To get an idea of what is happening, why not eliminate the middleman. The commercial press will not report in an unbiased fashion anyway when Israel is involved.

Go right to the source. You can monitor Twitter reports even if you are not a Twitter subscriber. Just go to this webpage and refresh the page every once and awhile. For those who already use Twitter, the hash code is #gaza. 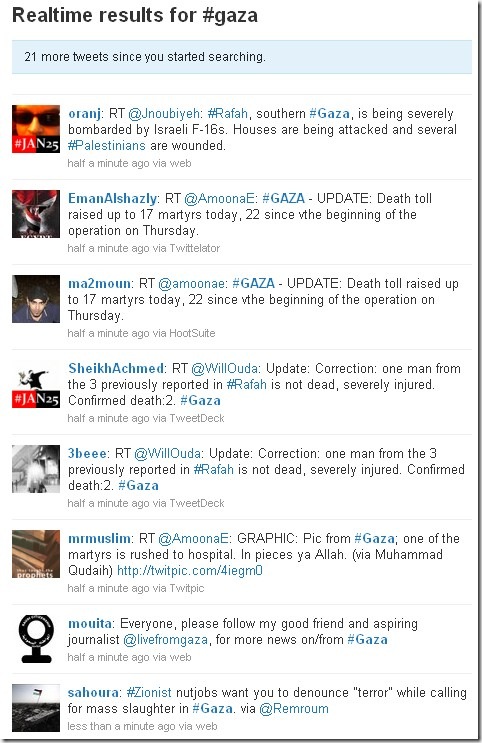 The above is an image, the links won’t work. If you go to the web page, though, you can click through to the images or articles that are reported.

Don’t expect your local newspaper to change much (though it would be welcome). And anyway, by the time it goes to print the story has changed. Even Democracy Now can’t keep up.

Also don’t expect Obama or our government to move to save civilian lives. These are Palestinian lives, not worth saving when Israel conducted its Cast Lead massacre in 2008-2009, and hardly worth Obama’s notice now. What will change his mind?

I can only read this with a feeling of disgust toward US and Israeli leadership.This is so WRONG ON THE PART OF BOTH COUNTRIES TO ATTACK AN ESSENTIALLY HELPLESS PEOPLE, THE PALESTINIANS.