Budget cuts often have deadly consequences, let’s talk about them

It’s too easy to accept the media take on the national budget squabble—that it is a matter of differing ideology, or that it is Republicans trying to unseat Obama.

The decisions made in Congress as well as the decisions made in state legislatures across the country are often decisions that affect life and death. On the national scene, defeating the healthcare law will of course result in fewer people getting lifesaving treatment. If one must speak in partisan terms, then the Republicans don’t care about human life, and the Democrats don’t care enough to nail them with that. In truth, Congress appears far removed from the lives of ordinary citizens, whether in this country or on the receiving ends of drone strikes.

At the state level, I’ll focus on Hawaii. Below is a video I posted a year ago. The Hawaii Department of Health had already been engaged in service cuts that could not avoid resulting in deaths. And yet, its officers did not object. Physicians in responsible positions did not resign in protest. The first that the public heard about the consequences of these service cuts was most likely in the sworn testimony below.

As you’ll see in the video, the legislators present were stunned. They looked at each other in silence.

And then… they did nothing. 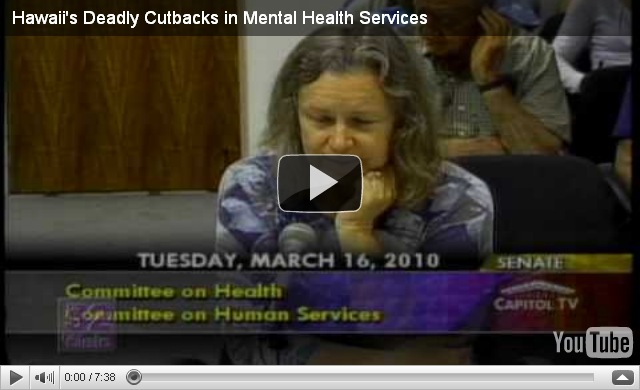 The same cuts are no doubt taking place all across the country.  The “economy” itself results in deaths because it leaves previously productive workers and their families without health care. But the “economy” is not to blame. It has been a Congressional and Presidential choice to bail out banks and leave citizens jobless and homeless.

Here in Hawaii the state legislature would rather squabble over how to get free meals for themselves. They allow the Department of Health to continue and deepen its service cuts, which must directly relate to an increase in avoidable deaths.

In many areas, they are doing their best to maintain safety net services, but nothing to reverse the cuts that are literally costing lives.

Hawaii’s state legislators include many who care deeply for the people they represent, and we have a new administration in place that is demonstrably more caring.

So is it a question of awareness, or what?

Suggest to your state representatives that they watch the short video above and that they do more than stare at each other afterwards. Particularly in hard times, we need to look out for each other.

I talk to quite a few so called conservatives and it never amazes me how they can equate life in the wilderness among the animals with the lives of human beings. They believe being worthy to live without worrying about healthcare and having money as one in the same. So a few tens of thousands die every year because they are not privy to the basis necessities in life. They don't have money so they aren't worthy to live anyway. This Ayn Rand mentality is a sickness that has accelerated America's race to the bottom.