Yikes! This headline screaming out of newspaper boxes all over Waikiki is sure to upset tourists. Is it accurate? Reading the story, Pearl City is by no means suffering an epidemic of dengue fever.

I can imagine the tweets flying back to Japan: “OMG, ハワイでデング熱が見つかりました! 来月ハワイに来てはいけない。” [OMG, they found dengue fever in Hawaii! Don’t come next month!”] 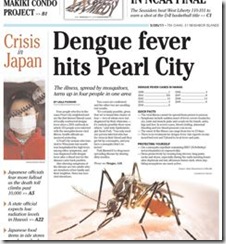 Of course, this is news. Reading the story though, it’s not much to worry about yet. Certainly, not something to splash on front pages all over Waikiki.

The Hawaii State Department of Health said Thursday it is looking into two confirmed and two suspected cases of adults who were stricken with dengue fever in February.

The four cases were nearby, and in February. All hell has not broken out in Pearl City. And as the article points out, a small number of cases are found in most years. Nor is dengue fever the plague.

Yes, residents living nearby the two confirmed cases should take precautions and doctors should be alert for new cases. But there’s no epidemic and no need for alarmist headlines like this, IMHO, anyway.