Star-Advertiser has new trick to hide paid ads, but was the writer a reporter?

I haven’t seen this one before. Maybe I just haven’t been paying attention.

I do know how useful the on-line MLS is, so a new website with even more data could really be news. Real estate data is useful in many ways, not just for buying or selling a home. For example, when a reporter needs to find a legislator living outside the district, the answer could be in MLS data. 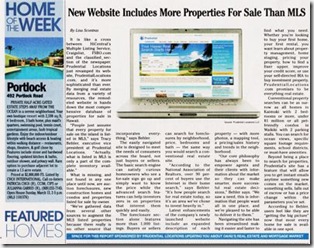 This article is written as, and positioned as, news. But it isn’t. The trouble is, it doesn’t say “Paid advertisement” at the top or anywhere.

The writer has penned similar articles for the late lamented Honolulu Advertiser, in their “custom publishing” sections. In other words, not news, but paid-for material.

There’s this curious line at the bottom:

What exactly does “Space for this report sponsored by Prudential Locations” mean? Does it mean that they bought an ad? Does it mean they contributed to the newspaper? Is Lisa Scontras writing as a reporter? They’ve given her a byline. Who is paying her?

I do wish the Star-Advertiser well, and maybe it’s necessary to forgive their regular pimping even half of their front page space to advertisers, but at least I can take that wrapper off and throw it away. It’s still important to be able to trust the stories inside. This ad or article or whatever it is undermines that trust.

If it is a paid ad and the Star-Advertiser is selling bylines so cheaply, it undermines the professionalism of those who have earned their names at the top of real news articles.

Good post. I was doing research on this Lisa Scontras - she's been writing these "articles" for years now. While they are relatively informative, they are what you say they are - masked ads. In some cases the ads feature quotes from banks, but the "article" is sponsored by a real estate brokerage. Does that in anyway tip-toe on RESPA violation? I'm no expert, but it does seem quite excessive.