As I write this, a 30-km no fly zone has been established not in Libya, but around the Fukushima nuclear reactors.  Small amounts of radioactive substances have been detected in Tokyo even though the wind has been blowing mostly to the east from Sendai.

Should a greater catastrophe release radioactivity into the atmosphere, where will it go? Should Hawaii be concerned?

A New Zealand weatherman has put together a short video posted on the New Zealand Herald website. He reviewed the flow of radioactive material from Chernobyl and illustrated the wind currents around Japan and the Pacific.

Philip Duncan from weatherwatch.co.nz explains how air currents could carry nuclear fallout from Japan if the feared meltdown takes place. 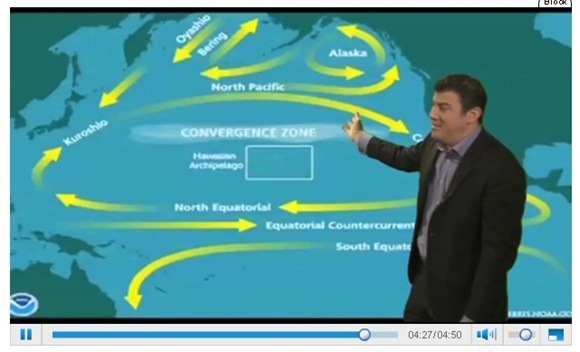 It appears that Hawaii is the hole in the doughnut—right in middle of something called the “convergence zone” on his map. But he was concerned with New Zealand. What we could really use is a local weather expert to pick this up and let us know how Hawaii might be affected.

What would we do if radioactivity were dumped on our crops and crept in under doors and through our jalousie windows? Good question. Of course, if it looked bad enough, we could leave. Maybe. Backing off, there isn’t any reason yet for drastic measures. But I’d like to hear that from an expert. In other words, professional advice on when to panic.

I also looked up “convergence zone” in Wikipedia and I’m not sure whether Hawaii is in it or not. Or what that would mean with regard to radioactive winds from Japan.

Click the link or the pic to view the video.

Thanks to an alert reader for sending me to this web page.