Watchdog barks: Is the Hawaii Ethics Commission paying attention to the reports it gets?

$10,000 is no small change. Yet it appears to have disappeared between two reports sent to the Ethics Commission that should at least have raised an inquiry.

In a January 27 article I asked Are lobbyists properly reporting when they throw parties for legislators? That article focused on an invitation to Hawaii state legislators to a breakfast at the Pacific Club on January 14, 2010 from the American Resort Development Association. A report by that organization is posted on the Ethics Commission website and available to the public. The organization’s payment to its lobbyists did not show up on the corresponding report filed by lobbyists, which is not available on the website. You have to go over there to look at it.

I did fax that article to the Ethics Commission but have not yet received a reply.

This one is a breakfast again thrown at the posh Pacific Club by the Hawaii Dental Association for state legislators. Note that this event was scheduled during the legislative session, and note also that the Legislature was considering bills that would benefit the HDA directly. One, HB1212 comes to mind. It was pushed by professionals including dentists because it would hide complaints against them from the public.

This is the invitation: 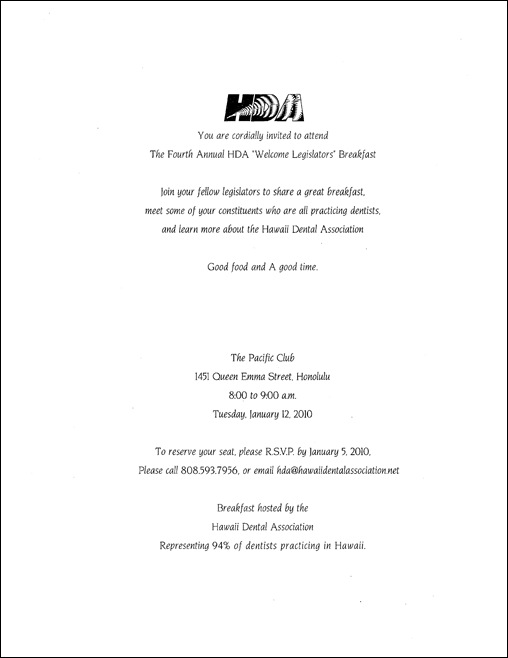 The HSA filed its report with the Ethics Commission, and that report is available from their website, here.

That report covers the time period in which the Pacific Club breakfast occurred. Here’s a copy of that report.

Notice that the report states that $10,000 was paid to lobbyist Russell H. Yamashita. Perhaps that payment included the Pacific Club event, we do not know. In any case, checking further, here is the report filed with the Ethics Commission but not available on their website. It does not include an expenditure for that period on behalf of this organization. Let me say that this does not imply any wrongdoing, perhaps the HDA paid the Pacific Club directly. But note, in the HDA filing, nothing is listed for entertainment. So the question is, who paid for that event, and where does it appear in the required filings?

This report is included as an example of what should be checked by the Ethics Commission, and what ought to be available to the public to view.

You never know, errors happen. For example, Mr. Yamashita spelled his name wrong on the form.

Let me repeat, from the earlier article:

The Ethics Commission should, in the interests of transparency, make sure that the public has access to the complete picture. The lobbying reports should be posted in full.  And I hope they will look into these particular documents to learn if there is an issue with the Pacific Club event.

I would hope for even more disclosure than we have—a list of legislators who attend lobbying events, for example. Perhaps that will require some new lawmaking.

I’ll fax this article over to the Ethics Commission for their comment, and post any reply they may care to send.