The Honolulu Board of Water Supply has posted the results of its initial tests for chromium-6 on their website (pdf). Test results range from 0.32 parts per billion (ppb) to 4.0 ppb. The latter figure is 67 times higher than California’s proposed limit of 0.06 ppb but still within the current EPA standards. The EPA is studying the possibility of revised limits for chromium-6. 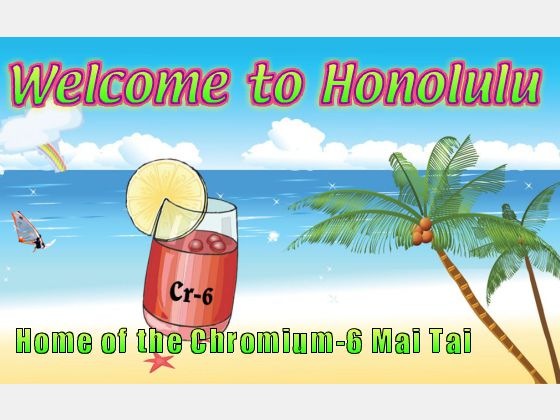 Chromium is a heavy metal that occurs throughout the environment. The soluble hexavalent form is relatively toxic, while the less-soluble trivalent form has very low toxicity and is a required nutrient.

The linked document explains the research into the toxicity of chromium-6 and establishes the foundation for the proposed California standards.

Given that some municipal sources in Honolulu have tested high enough to raise concern, how can the chromium be removed? It would seem to require that the city install reverse osmosis filtering at the locations where the level is deemed to be unacceptable.

Are you better off with bottled water?

The Board of Water Supply (BWS) does not test bottled water. You are on your own to dig up the information from the producer, if it is available at all. As we know, some bottled water is simply tap water.

Menehune water comes from the ground behind the old animal quarantine station. They address the issue of chromium-6 on a page on their website, specifically mentioning chromium. Reverse osmosis, the process they say they use to purify their water, is capable of removing chromium of all kinds from the water. They also provide test data linked from that page, but the units are not ppb and the reference for “ND” (“not detectable”)is not the same as used by the BWS, California or the EPA. They state a laboratory reporting level for each tested inorganic substance. It’s possible that one day I could figure that out, but it would be better to have a professional translate the Menehune data into ppb for a direct comparison and so consumers could verify their claims.

Here's the scoop. If the bottle says "filtered by reverse osmosis" it is clean and safe. If it doesn't, it isn't. In other words it's safer to drink ROed tap water than "natural, spring water"- or some such moniker- that isn't ROed.