There’s something screwy about those compact fluorescent lights. They seem not to be delivering the savings they were supposed to, according to a Wall Street Journal story.

I was a good boy and changed all of our incandescent light bulbs for CFLs except for the one that’s fully enclosed. Not only should they save money (13 watts instead of 60 watts), but the package says they have a seven-year warranty, if they are used 3 hours a day. That means fewer trips to the store for replacement light bulbs and fewer bulb changes. Great!

Trouble is, at least in our home, they don’t last seven years. It looks more like 1-2 years, with the last one holding out not even a year.

So I looked at the package. To get a replacement from the manufacturer I would need to pack the thing up and send it back for replacement. At my expense.  The postage cost is just a wee bit more than I paid for it.

So much for the seven-year warranty.

A recent news story indicated that California is disappointed in the savings CFL bulbs bring, and they also found that the lifetime is shorter than projected.

See: The New Light Bulbs Lose a Little Shine (Wall Street Journal, 1/19/2011). The unexpected burnout rate was only part of California’s problem, but there it is. 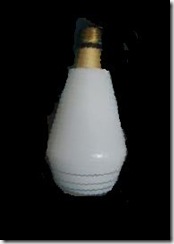 Speaking of long life, this is a Celeste bulb that I’m still hanging onto for some reason. When I worked for GE during the summer of 1966 we found a bunch of these on a shelf in the back of a warehouse. They had been discontinued years ago, so we were told we could take them home. I gave a couple to my brother and to my mother. We all had high ceilings that would be a great spot for these neat bulbs.

They sold in those days for about $2.50 if I remember correctly, which was about 10 times the price of a plain 75-watt bulb. They were decorative, came in at least two colors, maybe three, and were advertised to last a long time. So you could screw one into the ceiling, it would look great, and it wouldn’t be necessary to borrow a ladder very often.

The trouble was, they did last a long time… my brother ran his for something like 10-15 years. Maybe more. He still has his.

So of course, GE needed to discontinue them. Sell someone a Celeste bulb and it’s the last time you’ll sell them anything.

How come they lasted so long? The secret is that they did not give off the light of a regular 75-watt bulb. They gave less light and so they lasted longer. Too long.

I just wanted to post this picture, I don’t know when else I’ll get the chance. I imagine these are museum pieces by now. They’re kind of the antithesis of CFLs. Use more energy, get less light. Made in the USA, not in China. Made to last.  Yup, those days are gone.