WikiLeaks defenders have pulled off a first in cyber warfare

You’ve heard of the cyber attacks against Visa, MasterCard and others who have closed their WikiLeaks accounts, of course. 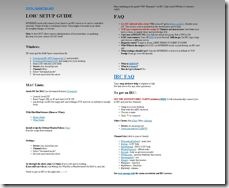 I was surprised yesterday after I followed a link and ended up on a page of instructions on how to join in on the attack. The web page had enough detail that had I wanted to, I’d be in business in probably less than an hour. It’s been since taken down, but mirrors are popping up here and there, so the info should still be available. This is a first.

I can’t recall a similar situation. Ordinary people are being given instructions on how to mount a cyber attack, and likely many are trying it. If this is just a blip on the radar it will still be interesting. If it is more than that, then a new era of “payback” may be dawning in which perceived corporate or government wrongdoing is met by cyber force mounted by thousands of sympathetic individuals.

WikiLeaks has much of the world incredibly stirred up. This is both good and bad. For example, the news that Obama’s drones have killed 30 innocent civilians in nine recent attacks has almost disappeared. WikiLeaks, WikiLeaks, WikiLeaks. It’s everywhere. It pushes other news out of consciousness.

Not that your average daily newspaper would report on the drone attacks anyway. But at the moment, the websurfing public’s attention is diverted by who is doing what to whom as governments attack WikiLeaks and its founder Julian Assange, and as ordinary people strike back.

Events are moving very quickly. In the midst of this overwhelm there is some disappeared news. Since I recently wrote about PayPal, I’ll pick up on that one.

It was widely reported that PayPal had received a government letter, as a result of which it closed WikiLeak’s account. Their corporate counsel has just denied this. The new revelation means, if true, that PayPal made a decision on its own, correctly or not, to shut down the WikiLeaks account, and so it is now firmly in the crosshairs of hackers who may well figure how to either shut it down or at least impede its operations.

According to a report by PandaLabs, website attackers have accomplished the following:

After pulling the plug on payments to WikiLeaks, Mastercard’s website was taken down and remains at least partially out of service.

Senator Joe Lieberman’s website was taken down for 12 minutes (the first .gov site to be attacked).

Sarah Palin’s website was taken offline by a small group of Anonymous attackers.

The group sent spam faxes to Joe Lieberman’s office and to PostFinance.

PostFinance was attacked the hardest, leaving customers without the ability to conduct online banking.

They took down the website of the lawyer representing the two women who were allegedly raped/assaulted by WikiLeaks founder Julian Assange.

At this writing, MasterCard and Visa websites are back up. I could not get to PostFinance.

The cyber attack on the credit card companies did not stop ordinary use of the cards. In the case of PayPal, an attack against their API (application programming interface) may interfere with their ability to process transactions. PostFinance probably suffered the most since it is reported that customers could not use their billpay services.

WikiLeaks itself is now said to be mirrored at over 1,000 sites. It is still operational even though Assange is locked up in Britain. The US government has lost the battle to keep it off the air, at least for now.

Here’s another bit of disappeared news. I’ve heard on the radio and on podcasts that this is also the first time that it is becoming clear in discussions that governments around the world (not just the USA) are working against their people. Duhh…. we knew that already. What’s new is that in a very few places, true, it is being discussed openly. The fact that Congress and the White House are still pampering the rich and starving the poor fits in, as does their failure to extend unemployment benefits. And so on. Each day something comes up to polarize Americans. Today it is denial of health services to 911 first responders.

For the first time in my experience there’s at least some discussion in the US that governments are not working for their own citizens but against them. In Europe that kind of discussion is much more common. Britain’s prince Charles, heir to the throne, was even caught up in a protest yesterday.

In a major security breach, demonstrators set upon the heir to the throne's Rolls Royce as it drove through London's busy West End on its way to a theater. A group of up to 20 struck it with fists, sticks and bottles, breaking a window and splattering the gleaming black vehicle with paint.

That’s Europe. Here, even talk about our government as evildoers is unusual. We haven’t taken to the streets as they have over there. I don’t mean all the crap on Fox News, what I mean is real discussion about why people and their government are opposed. But nothing has gone as far as stirring up major protests European-style.

Maybe we’ll skip the streets and it will just be cyber war. Who knows.

While I am in full support of defending the US Constitution against the US Governments attack on free speech the Patriot Act makes what Anonymous is doing a terrorist act. I don't have the guts to defend freedom of speech like they are for fear of going to jail but I must commend them for protecting freedom for all of us. The scary part is President Obama and his Homeland Security buddies are taking the role of the British during the Revolutionary War and Anonymous is playing the role of the patriots. During the time our forefathers were being suppressed, the British had established military bases around the world taking over countries for their own benefit and were in fact the terrorist. While our leaders tell us we live in different times the evidence leads me to believe not much has changed.