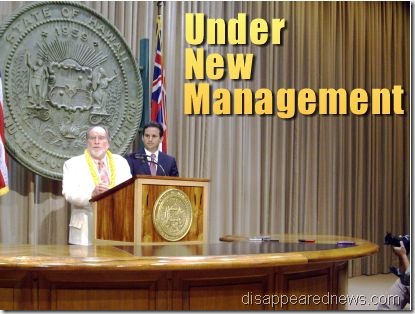 Today’s inauguration ceremony was followed swiftly by Governor Neil Abercrombie’s first press conference. He called Senator Suzanne Chun Oakland to the podium in recognition of her work in preserving Hawaii’s social safety net. As he announced that he would release $23.7 million from the Rainy Day fund, he noted that release of the funds was the will of the Legislature, a theme he would return to several times during the press conference. He said that the decision to release money from the fund was a collaborative process, and all that was missing was cooperation from the Governor’s office.

Abercrombie also stated that he was releasing $67 million to end teacher furloughs.

Here is a short audio clip:

I noted that attorney and SOS808 (Save Our Schools) member Clare Hanuz had been invited along with several other parents to the press conference. In April, she along with other parents and children were arrested outside the governor’s office, charged with trespass, and had to pay fines. In this photo, Clare is interviewed by Denby Fawcett of KITV (Click any of the pictures for larger). A list of organizations to receive the funds is at the end of the KITV story here. 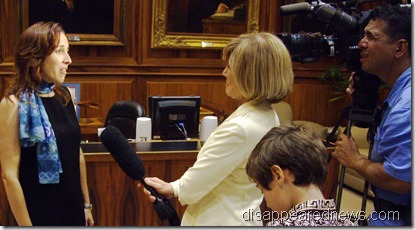 Challenges from the very start 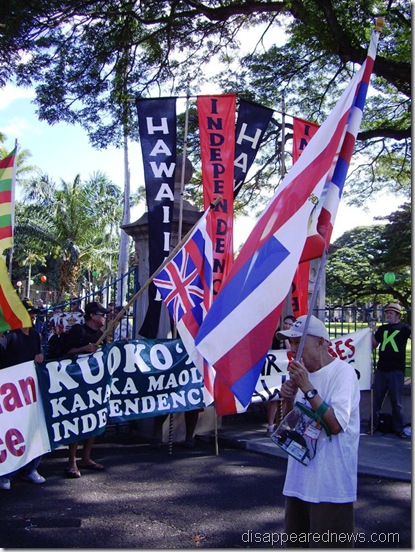 The “new day” began as ticketholders filed in through the King Street gate to the Iolani Palace grounds, past a display of flags, banners and signs along the Palace fence. Protest themes included the choice of the palace grounds for a ceremony that could not, of course, have taken place but for the illegal overthrow of the independent Kingdom of Hawaii in 1893.

In the mid-distance was the palace itself. The upper right window, covered with white paper, is where Queen Liliuokalani was imprisoned.

Frequently throughout the program, demonstrators called out loudly, but the calls did not disrupt the proceedings.

The Hawaii Independent has more on the protest, along with a great picture of Gov. Abercrombie and his wife, Nancie Caraway. They also beat me to noting that:

December 6, the date of today’s inauguration ceremony, is also the same day in 1852 that King Kamehameha III signed into law civil rights to subjects and citizens of the Hawaiian Kingdom in a sharing of sovereignty with the Hawaiian people.    [The Hawaii Independent, A ‘new day’ for Hawaii begins with protest, 12/6/2010] 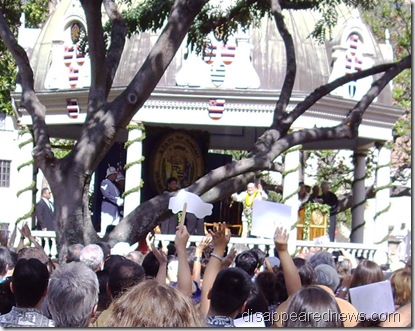 Governor-elect Abercrombie acknowledges the cheering crowd. The little car cutout being held up for him is likely a picture of a Checker Cab, which was one of his trademarks.

(The Star-Advertiser needs to do a bit of work on its on-line coverage of today’s inauguration. Besides fixing the typos, they should note that Abercrombie drove a classic Checker cab, which is not “a car decorated like a New York yellow taxicab.”)

I wasn’t in a great spot for many good pictures. Check out the TV station websites for some excellent video. 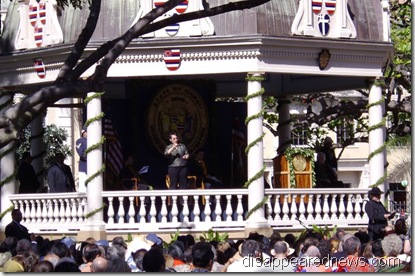 All the seated dignitaries were in shadow and often invisible to the audience. Only one person—Jan Fried, interpreting often very passionately in American Sign Language—was out in the sun the whole time. It’s hard work, by the way, and there would normally be a pair of interpreters for a program of this length. 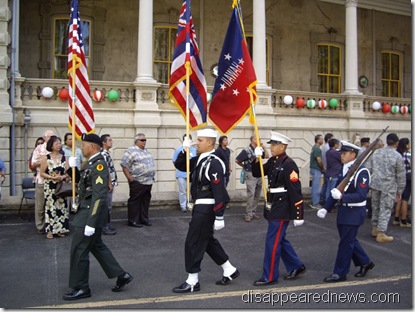 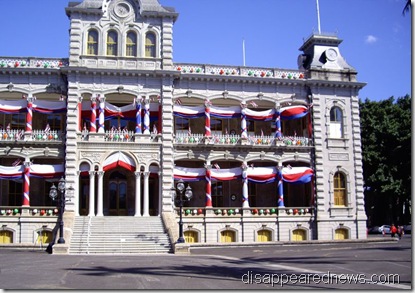 Iolani Palace decorated with festive bunting. The window at the upper right is the small room where Queen Liliuokalani was imprisoned after the overthrow of the lawful Hawaiian government in 1893 with the aid of the US military.

One unexpected pleasure was Willie K (Willie Kahaiali’i )’s performance of O Sole Mio—in Italian!—at the request of Gov.-elect Abercrombie when the program moved too quickly and was 10 minutes ahead of schedule. You’d never know that Willie K was raised on Maui, it was as authentically Italian as I’ve heard.

After the ceremonies ended, a luau was served under tents on the grounds of the State Capitol. The trays were not Styrofoam, they were made of biodegradable cardboard, and the sporks (spoon-forks) were stamped “Compostable.” Volunteers in Blue Planet t-shirts assisted with collection of the used trays, sorting the plastic poi containers, the sporks, trays etc. into the appropriate bins.

Hawaii was unmanaged for eight years and is desperate for any kind of management. New or old just give us some management.