Four days after the blizzard struck, many main streets in New York City, particularly in outer boroughs, are still not clear. Thousands of cars are being towed off the streets, but tow trucks can’t easily get to many of them because of the snow. 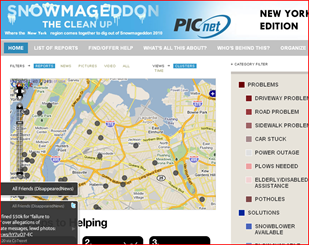 Technology has risen to the occasion, and much faster than Mayor Bloomberg’s snowplows.

Check out Snowmageddon The Cleanup for a great example of geek power.

This is something that might be useful anywhere. It looks like a good job, and it was put together in record time. Here’s a snip from their website on who did it:

Ryan Ozimek and his team at PICnet and Non-Profit Soapbox built the first Snowmageddon Clean Up site in February 2010 get the word out on how Washington DC neighbors could help each other clean up after the year's early snow storms.  Now, they're bringing this tool to the New York region for the Christmas Snowmageddon of 2010.